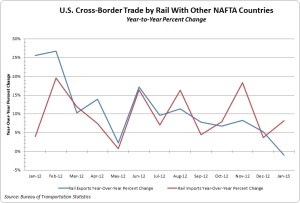 The U.S. is exporting a little over half of what it imports by rail from North American Free Trade Agreement partners Mexico and Canada, according to data from the Bureau of Transportation Statistics.

BTS noted: “In 2012, 86.5 percent of U.S. merchandise trade by value with Canada and Mexico entered or exited the country by the surface mode of transportation.”