US Cross-Border Truck, Rail Trade With Canada Down in June

US Cross-Border Truck, Rail Trade With Canada Down in June 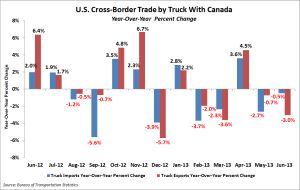 U.S. cross-border traffic with Canada via truck and rail declined 2.1 percent from $39.2 billion in June 2012 to $38.4 billion this June, according to data from the U.S. Bureau of Transportation Statistics. The value of imports by rail from Canada did, however, see a slight increase year-over-year.