US Containerized Footwear Imports Up in First Quarter

US Containerized Footwear Imports Up in First Quarter 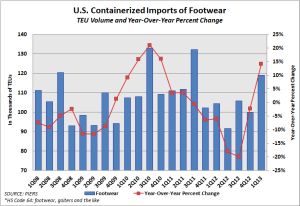 Containers of footwear imports through U.S. ports jumped 14 percent year-over-year in the first quarter of 2013, the largest increase since fourth quarter 2010. Quarterly declines extending from the third quarter of 2011 preceded this upturn.

“China is doomed to see its strength in labor-intensive manufacturing wane at a slow but steady pace in the years to come,” JOC economist Mario Moreno said. “China’s new economic plan focuses on the rebalance of the economy where the emphasis is in boosting consumer spending as a percent of GDP. This means wages will be allowed to continue rising, adversely impacting the profitability of labor-intensive industries such as footwear.” 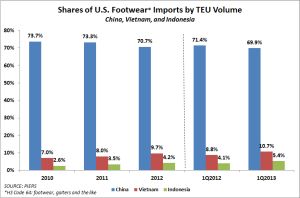 Rising production costs in China have prompted some factory owners to relocate facilities to low-cost producers Vietnam and Indonesia. In the November 2012 JOC Insights report, Moreno said, “The relocation process will be slow for all those footwear and other labor-intensive goods factories in the export trade because China has superior infrastructure than Vietnam and other Southeast Asian economies. Vietnam is making some progress in that area, but it is slow.”