US Containerized Exports Bounced Back in July

US Containerized Exports Bounced Back in July 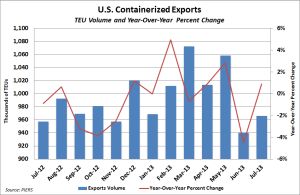 U.S. containerized exports inched up roughly 1 percent year-over-year in July, to 966,148 20-foot-equivalent units, according to preliminary figures from PIERS, a JOC sister company. July’s slight increase was a rebound from a 4.5 percent drop in June, when exports hit their lowest level since July 2011.

“Growth in both the advanced economies and emerging markets slowed down in the second quarter, abetted by poor external demand,” said Journal of Commerce economist Mario Moreno in the September report of JOC Insights. “U.S. growth was below trend, and the recession in Europe deepened. It’s no wonder then that under these circumstances, U.S. exporters of containerized goods faced a shrinking market. The export forecast for 2013 was downgraded to 1.0 percent, from 2.6 percent.”

Of July’s top 25 containerized export commodities, the highest year-over-year increases were in spices, which soared 798 percent; plastic products, up 35 percent; and grains and flour, up 22 percent. The largest declines were in pet and animal feeds, down 45 percent; metal scrap and pig iron, down 40 percent; and medical equipment and supplies, down 31 percent.

Among July’s top 25 destination countries, Panama saw the steepest growth in exports from the U.S. in July: shipments rose 50 percent to 11,348 TEUs. Shipments to Brazil totaled 28,311 TEUs in the month, up 15 percent year-over-year. Exports to the Netherlands climbed 14 percent, to 19,486 TEUs. Shipments to Turkey fell the most, down 18 percent year-over-year to 11,003 TEUs. Volume to Thailand declined 14 percent to 10,608 TEUs, and Singapore followed with a loss of 12 percent to 10,506 TEUs.