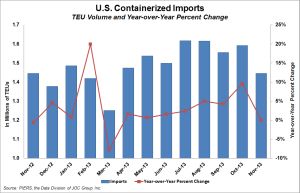 “I have modestly downgraded the imports forecast for the fourth quarter from 6.6 percent to 5.2 percent mostly because of the fading impact of the partial government shutdown over business and consumer confidence,” said Journal of Commerce economist Mario Moreno in the November report of JOC Insights. “Total U.S. imports via ocean container are now forecast to grow 3.5 percent in 2013, downgraded from 4.1 percent, and 5.9 percent in 2014 as economic activity picks up the pace.”

In the first 11 months of 2013, imports increased 3.2 percent year-over-year; however, November imports were down 2.7 percent from containerized volume in January.

Leading the declines among the top 25 imports were men’s wear, down 38 percent; address machinery, down 19 percent; and apparel, down 17 percent. The largest gains were seen in fabrics including raw cotton, with a 48 percent year-over-year jump; woodenware, up 32 percent; and plastic products, up 31 percent.

Eastbound trans-Pacific imports rose 1.5 percent year-over-year to 1.07 million TEUs in November. The largest drop was in imports from the Middle East region, which tumbled 34 percent to 6,096 TEUs. The largest regional increase came from the west coast of South America, which climbed 7 percent in volume to 33,718 TEUs from 31,508 in November 2012.