PIERS: US Containerized Imports Down in February

PIERS: US Containerized Imports Down in February 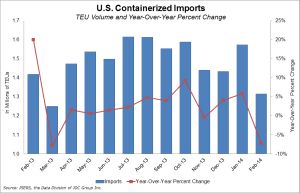 “While the U.S. labor market made large strides in 2013, a closer examination of the numbers reveals that a disproportionate share of jobs created over the year were low wage and low skill,” said JOC Economist Mario Moreno in the February report of JOC Insights. “I am therefore maintaining the projection of 5.9 percent growth in containerized imports for 2014.”

Leading the declines among the Top 25 imports were menswear, with a 31 percent year-over-year drop; computers, down 30 percent; and sheets, towels and blankets, declining 27 percent. The largest gains were seen in fabrics, rising 38 percent; plastic products, improving 24 percent; and bags, up 14 percent.

Eastbound trans-Pacific imports fell 9.8 percent year-over-year to 952,030 TEUs in February. The largest regional drop was in imports from Northeast Asia, which slipped 12 percent to 771,573 TEUs, due to an early Chinese New Year in January. The largest regional increase came from Africa, which climbed 20 percent in volume to 8,202 TEUs in February 2014.