PIERS: US Containerized Imports Up 3 Percent in 2013

PIERS: US Containerized Imports Up 3 Percent in 2013 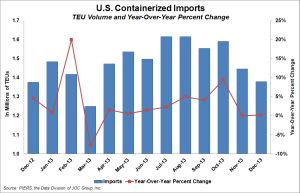 U.S. containerized import volume inched up 0.3 percent year-over-year in December, according to advance figures from PIERS, the data division of JOC Group Inc. Imports totaled 1.38 million TEUs in December, and 17.87 million TEUs for the full year of 2013, up 3.0 percent from full year 2012.

“The U.S. economy performed surprisingly well in the third quarter, but around half of the 3.6 percent expansion came from a sharp increase in inventories. Import volume growth will be lower in the fourth quarter than previously estimated, but still at a respectable 5 percent,” said Journal of Commerce Economist Mario Moreno in the December report of JOC Insights. “Looking forward into 2014, the auto industry is poised to expand further, boosting trade and job creation. The home sales market, however, may stall a bit in 2014 as the 30-year mortgage rate increases to 5 percent or more, lessening the demand for top-ranked import furniture.”

December imports were down 4.6 percent from containerized volume in November and down 7.1 percent from January 2013.

Leading the gains among the top 25 imports were fabrics, up 55 percent; plastic products, up 42 percent; and bags, up 17 percent. The largest declines were seen in non-alcoholic beverages, with a 26 percent year-over-year drop; menswear, down 25 percent; and miscellaneous fruits, down 18 percent.

Eastbound trans-Pacific imports rose 2.7 percent year-over-year to 1.01 million TEUs in December. The largest drop was in imports from the Oceania region, which tumbled 23 percent to 10,586 TEUs. The largest regional increase came from the Indian subcontinent, which climbed 10 percent in volume to 50,239 TEUs in December 2013.

Among the major U.S. ports, the largest growing port in 2013 in terms of TEU throughput was Florida's Port of Jacksonville, which jumped 20.6 percent to 153,638 TEUs during the full year. The ports of Mobile, Ala., and Tacoma, Wash., also saw large yearly increases of 17.7 percent and 16.6 percent, respectively. The major U.S. port with the biggest decline in 2013 was Seattle, which tumbled 27.3 percent in volume to 525,899 TEUs. The ports of Los Angeles and Philly saw smaller declines this year, down 3.3 percent and 2.8 percent, respectively.