Containerized export volume from Europe fell by double digits in January 2013 from December 2012 in almost every trade lane, according to data from Container Trades Statistics, Ltd..

Rates in this market as tracked by CTS rose considerably in 2012. The CTS rate index rose from 70 in January to 99 in December, hitting a high of 104 in June. This was a 41.4 percent rise from the beginning of the year. However, the index had dropped to 95 in January 2013.

Exports from Europe to Australasia/Oceania rose 4.1 percent year-over-year to 40,400 TEUs in January 2013 but were down 11 percent from December 2012.

Europe to the Indian Subcontinent and the Middle East

Containerized trade from Europe to the Indian subcontinent and the Middle East declined to 208,800 TEUs in January 2013, down 10 percent compared to January 2012, and 21.9 percent lower than the level seen in December 2012. 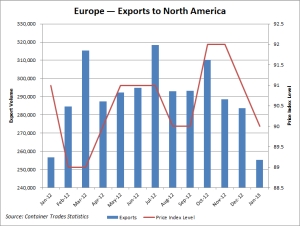 Rates in this market remained relatively flat in 2012. The CTS rate index was at 74 in January and ended up at 76 in December. It moved between 69 and 77 throughout the year. The index remained at 76 in January 2013.