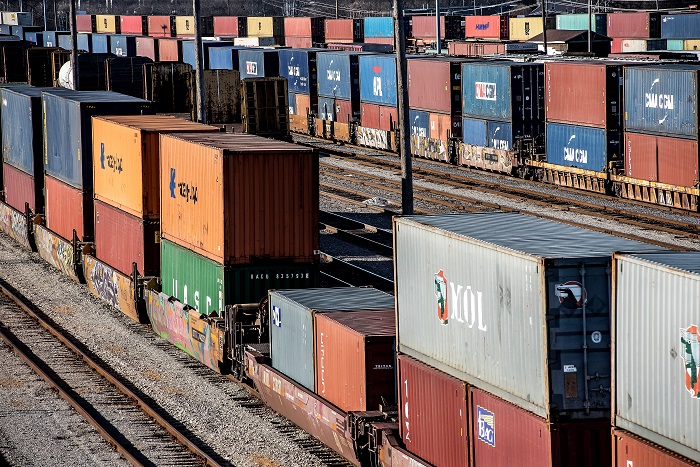 Money can address some factors, but until several key checkpoints in a container’s journey address operational inefficiencies, bottlenecks will persist, consultants and industry executives said at the JOC Inland Distribution Conference this week in greater Chicago. Photo credit: Shutterstock.com.

OAK BROOK, Illinois — More money for infrastructure, additional assets, and higher freight rates won’t solve the freight bottlenecks plaguing US ocean shipping and distribution; only a focus on the freight-handling inefficiencies that cause these problems will.

The tight capacity conditions that have caused truck and intermodal rail rates to soar this year will moderate in 2019, due to global economic forces. But trucker delays at marine terminals, railyards, and distribution warehouses will continue because of inefficient freight-movement processes in the supply chain, consultants and industry executives said at the JOC Inland Distribution Conference in the greater Chicago area this week.

The warning signs are everywhere. Ships are bunching at ports, and trains are bunching at intermodal ramps, resulting in trucker delays at those facilities. Rail service issues begin at the ports and intermodal ramps and continue throughout the North American networks due to inconsistent container-handling processes at the railyards, inadequate train velocity, and weather events such as hurricanes, snowstorms, and frigid 2017-2018 winter temperatures.

Chassis shortages and dislocations are rampant at rail facilities as well as marine terminals, and seem to be increasing in frequency despite developments such as the formation of the pool of pools in Southern California, a recently announced chassis pool in the Southeast, and additional options offered by newer intermodal equipment providers to supplement the fleets of the three major intermodal equipment providers (IEPs).

The much-touted US driver shortage is not an actual shortage, but rather the inefficient use of drivers’ available service hours, due to delays at marine terminals, rail ramps, and along congested roadways. Warehouses are also a bottleneck, and beneficial cargo owners (BCOs) are now hearing that it is they, rather than the drivers, who are becoming expendable. “We will give up a bad customer for a good driver any day of the week,” said Mike Regan, cofounder and chief of relationship development at TranzAct Technologies. “If you are an occasional, inefficient shipper, be prepared to pay more,” he said.

Freight volumes have increased this year, and this is having an impact on cargo-handling at the ports and throughout the inland transportation network. US containerized imports through August were 4.8 percent higher than during the same period last year, according to PIERS, a JOC.com sister product. International cargo accounts for about 50 percent of intermodal freight. Intermodal volume increased 4.7 percent in the third quarter versus the same period last year, according to the Intermodal Association of North America (IANA). These growth rates, while positive, are not enough on their own to cause bottlenecks in North America’s extensive port and intermodal networks, but they have exposed the weaknesses in the supply chain.

As a major gateway for containerized imports that move by rail and truck, the Southern California port complex takes a broad view of the supply chain, including both ocean and inland transportation, said Noel Hacegaba, deputy executive director and chief operating officer at the Port of Long Beach. The stress on the supply chain that the ports see begins with today’s vessels of 10,000- to 14,000-TEU capacity, and the huge cargo exchanges of 10,000 or more per vessel call that the mega-ships create, he said. Long Beach alone generated 3.8 million truck moves in 2017, an average of 300,000 per month, which represented an increase of 13 percent over the past five years, port statistics show. In a port complex with 17,000 trucks, 68,000 chassis and a dozen container terminals, the job is becoming increasingly complex, Hacegaba said.

BCOs dealing with a ‘massive increase in complexity’

Therefore, even though the growth in cargo volumes will likely slow somewhat in the coming year, BCOs will continue to deal with a “massive increase in complexity” as they attempt to coordinate freight movements through marine terminals and along the overland truck and rail networks to their distribution facilities, said Matthew Gordon, director, transportation engineering, at Anheuser-Busch InBev. If drivers are experiencing delays at the terminals, rail facilities, and receiving warehouses, they are experiencing “too much down time,” he said.

The complexity is increasing also due to the “Amazon effect” that calls for shorter lead times, tighter delivery windows, and smaller, more frequent shipments, said Jim Endres, general manager of Paragon Software Systems. Drayage companies in Southern California are responding to the needs of e-commerce fulfillment centers by establishing satellite yards where containers from the harbor are stored overnight so they can be delivered the next morning to the fulfillment centers, which normally do not have much storage capacity.

Chassis dislocations at ports and inland hubs, and inconsistencies in the handling of chassis at different facilities, are having a significant impact on driver productivity. Each Class I railroad has its own process for handling containers and chassis, causing BCOs and truckers to wonder, “Is my container going to be on the ground or on wheels,” said transportation consultant Andrew Nutting. This is not a new problem, but the industry now has technology that can help BCOs and truckers if only more facilities would push this information to the users, he said.

The management of chassis pools also has room for improvement if the needs of truckers are to be met, said Donna Lemm, executive vice president, national sales, at IMC Companies. Although the intention of pools is to provide interoperability of assets so that truckers are free to pick up and deliver chassis throughout the region without regard to the owner of the asset, the so-called pool of pools would benefit from a single manager for the competing pools. That is why some truckers advocate a “pool of pools-plus” solution with one manager in charge of managing and coordinating the activities of the entire pool, she said.

Technology — so far, too siloed

While the transportation industry is looking to technology solutions to address many of the efficiencies it faces, each segment of the transportation supply chain, including ocean carriers, port authorities, marine terminals, equipment providers, truckers, and railroads, has access to a number of technology products that can address specific issues particular to each sector, but they are all siloed in their respective industries.

The Port Optimizer being developed by GE Transportation in cooperation with the Port of Los Angeles is attempting to bridge this gap by offering a “system of systems” that will allow each supply chain member and each technology provider to plug its system into the overall system of systems, thereby providing all users with a single point of access. In this way truckers, BCOs, railroads, equipment providers, and railroads do not have to integrate their individual systems directly with dozens of service providers, but rather will have access to the information that is aggregated via a single access point.

When fully developed in Los Angeles-Long Beach — where pilot projects have been ongoing the past two years — users will have access to real-time information on vessel stowage, container discharges, free storage time remaining, container dwell times, chassis availability, information on the return of empty containers to the terminals, Customs holds, truck line times at gates, and turn-times within the terminals, Brian Hill, digital solutions director at GE Transportation, told the Wesccon conference Saturday in Palm Springs, California. Much of this information will be provided via individual programs that are plugged into the Port Optimizer. “We’re ready to take all of these technologies into the Port Optimizer,” he said.

The next stage in the process will come when truckers and BCOs can use the data ahead of vessel arrival so truckers can plan their appointments to take delivery of the containers and BCOs can plan their labor and equipment needs at the receiving warehouses. “We want a predictive analytics industry,” said Weston LaBar, CEO of the Harbor Trucking Association in Southern California.

Well done Bill. To me the

Permalink Submitted by ferrullig@minds... on Oct 28, 2018 11:33AM EDT
Well done Bill. To me the real issue is the US had the best infrastructure in the world - through the 60's maybe 70's. Then the global trade started to explode in mid-80's through 2006 and the infrastructure simply wasn't capable of handling that. And hasn't really been upgraded that much since then. The billing and collection of Billions for the Harbor Maintenance Fee's - where is it? Last I saw less then 50% spent on upgrading ports. Then the inland infrastructure; it's the governments job to maintain and upgrade bridges, roads - they haven't. It's the railroads job to upgrade their facilities and trackage, they have somewhat but not enough. Look at their returns recently published, great for stockholders and those employees on incentives. So money may not be THE solution, it is certainly a big part of it, and those who are accountable haven't done their jobs.
International Logistics
International Logistics
International Logistics›Distribution Centers
International Logistics›Logistics Providers
International Logistics›Logistics Technology
Port News›Terminal Operators
Rail & Intermodal
Trucking Logistics
North America
North America›United States