Lineage Logistics is a significant presence in the U.S. industrial real estate market.

Tthe second-largest cold storage company in the world  according to the International Association of Refrigerated Warehouses, Lineage has 290 million cubic feet of storage. It ranked seventh in 2012, when it had 127.5 million cubic feet.

The warehousing and logistics company was created by Bay Grove Capital, which acquired  cold-storage companies and then combined them under the Lineage banner in April 2012. Growth through acquisition has marked the company’s history since then as well.

In 2013, Lineage has added the assets of Seattle Cold Storage, formerly one of the Puget Sound’s largest public refrigerated warehousing companies, and a facility near Chicago in University Park, Ill.

For a discussion of Lineage and its competitive environment, see Reefer Warehouse Companies on the ‘Grow’.

The State of Intermodal
END_OF_DOCUMENT_TOKEN_TO_BE_REPLACED 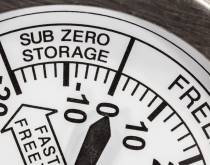 US warehouses, ports prep for reefer volume boom
12 Jun 2019
Commercial realtor CBRE forecasts refrigerated warehousing will increase 30 to 40 percent over the next five years, even though the rapid supply and demand imbalance in warehousing overall is flattening.

New service fueling Savannah port’s reefer growth
09 May 2019
The first Central American vessel as part of two vessel strings from Seaboard Marine to the US East coast visited Savannah this week, a growing trade lane that has generated a 70 percent increase in imports in Georgia since 2014.