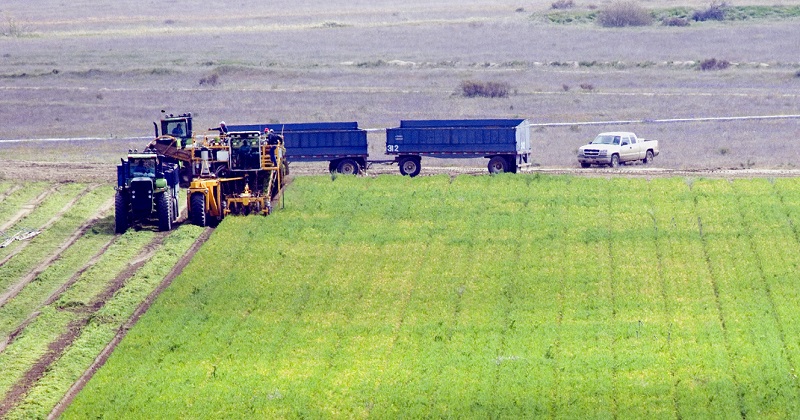 The electronic logging device mandate’s impact has rippled across supply chains, and there is no better example of that than the US agriculture export market. (Above: A carrot farm in California.) Photo credit: Shutterstock.com.

Agricultural exporters who ship fruits, vegetables, and identity-preserved crops are experiencing container repositioning problems, congestion at ports and railyards, and a breakdown in service levels following ocean carrier mergers and the restructuring of vessel-sharing alliances (VSAs). Now a shortage of truck capacity has been added to their logistics problems.

“It’s a mixture of things, but the ELD [electronic logging device] issue is probably the most serious thing impacting our industry,” said Bruce Abbe, president and CEO of the Midwest Shippers Association, which represents shippers of high-quality grains, soybeans, and oilseeds in the upper Midwest.

Electronic logging device: it has altered many markets

Enforcement of the federal ELD requirements beginning April 1 has limited the ability of drivers in many agricultural regions to complete their hauls to ports, railyards, and transloading facilities within their hours-of-service limitations. “Some are on the outer edges of the distances,” Abbe said. Congestion at ports and railyards further limits drivers’ ability to serve longer routes.

The ELD requirement has affected all sectors of the motor carrier industry, in effect creating an artificial shortage of drivers and capacity. Owner-operators are abandoning some longer-haul routes and are focusing on shorter drayage moves where they can get multiple hauls per day.

Ocean carrier mergers over the past two years and the shotgun start on April 1, 2017, of the restructured VSAs have created problems for those agricultural exporters who lost opportunities for direct shipment to secondary markets as carriers concentrate their larger vessels on fewer port-to-port services. This has left some agricultural exporters with longer gaps between sailings and the need for more overseas transhipping, he said.

Carrier mergers, as occurred most recently in April when NYK Line, “K” Line, and MOL combined to form Ocean Network Express, have generally involved short-term disruptions and sometimes a disconnect between carrier representatives and shippers. “We’re worried the carriers are not export-minded. There are new customer service representatives in place. They’re just green,” Abbe said.

Container shortages at inland locations come and go during the year, based on import cycles. Agricultural exporters need a steady supply of imports at nearby population centers that can be unloaded and trucked to transloading facilities to be filled with agriculture exports. There was sufficient supply in the upper Midwest earlier this year, but shortages have suddenly emerged, especially in the Minneapolis area, Abbe said.

Some agricultural exporters in the Midwest who used to ship through the West Coast are benefiting from lower freight rates from East Coast ports because carriers have increased their capacity close to 30 percent, following the Panama Canal expansion. Carriers this past year lowered their rates in order to attract more cargo. As a result, soybean shippers in the Ohio Valley can save $400 to $600 per FEU because of lower ocean shipping and rail charges through an East Coast port such as Norfolk compared with shipping through a West Coast gateway, said Ed Zaninelli, president of Griffin Creek Consulting, who formerly was an executive in charge of exports with OOCL. Abbe said there is growing interest among his members in East Coast routings, “but they have to get to the right destinations,” he said.

Agricultural exporters are also shipping more through Vancouver and Prince Rupert, but winter weather issues, rail service problems, and port congestion resulted in a doubling of container dwell times to six days, and terminal congestion forced vessels at times to remain at anchor three days or longer. Kevin Krause, vice president of ocean services at Seko transportation, said some of the non-vessel operating common carrier's customers are returning a portion of their cargo to US West Coast ports this year to reduce risk should the problems resurface during the peak season this autumn.