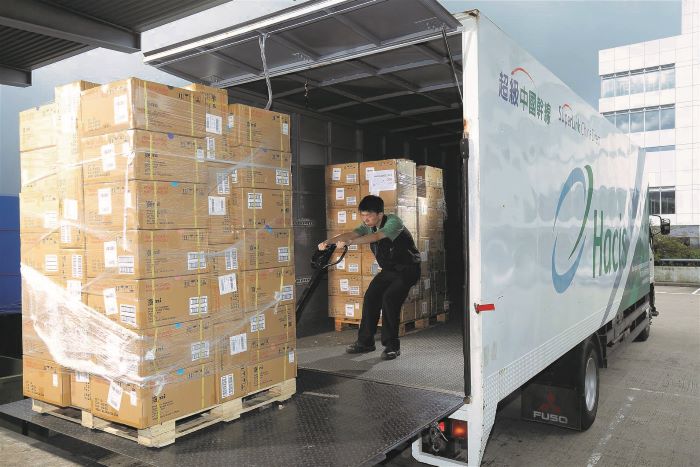 Hacis, the cross-border trucking company owned by Hong Kong Air Cargo Terminals, said none of its services have been suspended so far and the only disruption to normal operations was the extension of the Chinese New Year holiday. Photo credit: Hacis.

Trucking and depot businesses in China are showing a slow and patchy resumption of operations after crashing to a virtual halt after the Chinese New Year holiday was extended due to the coronavirus (COVID-19) outbreak that has crippled factory and industrial output.

Wintry weather in northern China last weekend has created a further challenge, weighing on the return to work at terminals in Dalian, Tianjin, and Qingdao. That comes even as businesses scramble for swift transport options, including air and rail, freight forwarders said.

“Business is recovering with a massive amount of opportunities. Clients are searching for urgent solutions, including aircraft charters and rail between China and Europe,” said one Hong Kong freight forwarder.

Highlighting the impact of the anti-virus measures on China’s trucking industry, a senior Hong Kong-based executive at a European logistics company told JOC.com: “Trucking and traffic limitations remain a major issue, but this is slowly improving.”

“Trucking capacity is much better in north China with around 70 to 80 percent availability as the drivers mainly come from provinces in China,” the executive said. “In central and south China, the recovery is much slower with operations only at 20 to 40 percent capacity as many drivers are from Hubei and surrounding provinces where the epidemic is more widespread.”

“The most critical trucking situation is in Ningbo and all of Zhejiang Province where only 10 to 20 percent of trucks are available because the area is still under restriction and partial lockdown,” the source added.

Authorities in Zhejiang Province have recently published guidance on what measures trucking companies need to take to resume operations, probably from February 23, that will also affect work at the container terminals in Ningbo.

Hapag-Lloyd said in a customer advisory on Tuesday that all terminals and depots were now open. “However, some are still operating at limited capacity. Furthermore, truckers’ shortage remains an issue,” the carrier said.

CMA CGM and APL said its offices in China would only return to full operations from March 2, although staff would continue to work remotely.

Normal operations not expected until at least March

The resumption of operations is being slowed because of strict measures imposed by local authorities to tackle the virus, including submission of an implementation plan by each business that must be approved before staff can resume work. As a result, normal operations for most factories and businesses are not expected until next month.

A Maersk China spokesperson told JOC.com that nationwide “most of our trucking suppliers have resumed operations,” although they are operating “with less than 50 percent of their staff, since all trucking companies must follow local restrictions to receive a permit to resume operations.”

“To mitigate the trucking capacity issue, Maersk is introducing a multi-modal bundle service along the Yangtze river, especially in the Suzhou, Wuxi, and Changzhou areas,” she added. “Trucks will connect to barge or rail services serving Maersk’s Shanghai container terminals and make empty equipment available in these city areas.”

But there are pockets where trucking is operating almost normally.

Hacis, the cross-border trucking company owned by Hong Kong Air Cargo Terminals, said none of its services have been suspended so far and the only disruption to normal operations was the extension of the Chinese New Year holiday to February 9 by the Guangdong provincial government.

Hacis provides freight services between Hong Kong International Airport and a raft of destinations in China, including the Pearl River delta bordering Hong Kong and further north to cities such as Xiamen and Chongqing.

“We started work from last week,” she said. “There is no problem for truck production and delivery. It is busy because of more orders.”

The Hong Kong logistics executive said most warehouses in China’s coastal cities reopened last week, but with limited activity due to the labor and truck shortages. But he pointed out that large factories are resuming operations much faster, while a lot of small factories in central and southern China will only restart operations at the beginning of March.

Companies including Tesla, Honeywell, computer maker Lenovo, and agricultural giant Cargill all confirmed most of their plants resumed work on February 10. But others, including Hong Kong-listed printed circuit board maker Confidence Intelligence, said Tuesday they have yet to hear from the authorities in Shenzhen when it will be able to restart production.

“Qingdao is becoming the key port for accommodating excessive reefers for Shanghai and Ningbo,” the source said.

Both Fuzhou and Shantou are experiencing low productivity with about 60 percent trucker availability.

In Wuhan, capital of central China’s Hubei Province and where the outbreak of the coronavirus was first reported in December, the local government has announced depot operations will not resume until at least February 21.

Wintry weather has added to shippers’ woes, with snow over the weekend in Dalian, Tianjin, Qingdao, and Lianyungang slowing the release and return of empty containers where volumes are 50 percent of normal levels. Fog has also affected operations at Shanghai and Xiamen.

The Hong Kong logistics executive estimated that more than 1 million TEU of capacity has been withdrawn on Far East-west board routes until week 13 — March 23-29. “A massive shortfall of capacity is anticipated from Europe in April and May,” he said.

China Renaissance, a Hong Kong-based brokerage, said delays in the resumption of work due to the extended holiday and virus-related restrictions could cost 1,371 billion RMB ($196 billion) in lost GDP. But this could be offset by a gain of 1,106 billion RMB in GDP if firms ramp up production in March.

“Logistics, including distribution of goods both locally and nationwide, is one of the biggest bottlenecks at this point amid the virus outbreak,” the brokerage said in a research report on Monday.

“Due to the virus outbreak, even in tier-1 cities with higher volumes than lower-tier cities, logistics demand this year is below 30 percent and volume stands only at about 10 percent of normal volumes after Chinese New Year,” the brokerage added.

Not all shippers suffering amid global supply chain chaos

Navigating the Winding Roads This Peak Season & Beyond
END_OF_DOCUMENT_TOKEN_TO_BE_REPLACED