Get Your Ship in Order for a Successful 2022 RFP Season: Market Trends & Tips for Shippers

Get Your Ship in Order for a Successful 2022 RFP Season: Market Trends & Tips for Shippers

One thing that everyone agrees upon is that the “traditional” method of conducting FTL RFPs is manual, time-consuming and a drain on resources for both shippers and carriers. Driven by the limited number of carriers that can be invited to an RFP, the time they take to execute and the one-year duration of a contract, the end result of most bids is a combination of paper rates, load rejections and Route Guide corrosion.

We at Emerge definitely agree with the above assessment, but we also believe that FTL RFPs shouldn’t be viewed so blanketly. Instead, the RFP must be reimagined and viewed within the context of the digitalization of the end-to-end FTL shipping model. Specifically, when shippers and carriers use the Emerge Freight Procurement Platform it’s easy to see that the RFP is not only alive and well, but that all parties can participate in as many bid events a year as they choose with great efficiency. 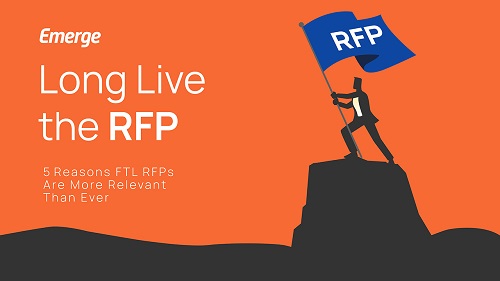 At its core, the Emerge Freight Procurement Platform simplifies the entire FTL contract process from end to end, allowing shippers to receive bids from their incumbents and Emerge’s network of pre-vetted carriers in a fraction of the time. Driven by tech, a full-blown RFP can be executed in just few business days rather than months.

Without question, Emerge offers shippers a level of speed, accuracy and control with RFPs never before seen in FTL shipping. With over 500 successful RFPs conducted on the platform within the last six months, we can say with confidence that RFPs are not only here to say, but that there will be many more of them!

Empowered by the capabilities of the Freight Procurement Platform, here are five reasons why RFPs create more value than ever before:

When you think about it, “Old School” RFPs actually limit the number of carriers that can be invited to a bid. Constrained by the amount of time and human resources a shipper can commit to a long RFP process, even the most organized logistics departments will eventually hit a wall and have to exclude otherwise qualified carriers from a bid.

When conducting an RFP, The Emerge Freight Procurement Platform gives shippers unlimited access to pre-vetted carriers without the administrative burden. With the ability to quickly customize rate templates that are then shared simultaneously with selected invitees, the shipper gains access to more carriers, which in turn generates greater competition among participants.

This approach is actually better for the carriers, too, because the days of submitting pricing for a one-year contract period knowing that the exercise will result in paper rates and load rejections are gone! With a two or three-month bid cycle, carriers can confidently commit to pricing without having to worry about uncomfortable shipper conversations further down the road.

3. Alignment of volumes with equipment and service requirements

When a shipper executes more than one bid per year, their projections of freight volumes for the designated RFP period are more accurate. In other words, shippers have a better fix on upcoming volumes over a two or three-month period than they do over twelve. And where there’s greater volume accuracy, there is a greater willingness by carriers to commit equipment, drivers and service levels.

For the carrier, the multi-bid-per-year approach is equally advantageous because it’s easier for them to allocate equipment and drivers for a shorter period than for a full year. Again a question of enhanced sensitivity to market conditions, multiple bids throughout the year create win/win situations for both shippers and carriers where prices are honored and most importantly — service levels are met.

Regardless of the size and scope of a shipper’s FTL program, each bid event can be a reflection of factors like seasonality, the addition of new lanes, regional shifts in volumes or a short-term project. While certainly possible, there’s no rule that says a shipper has to put all of their lanes out to bid every time an RFP is executed.

Given all the plug and player features inherent to the Emerge Freight Procurement Platform, it would take a shipper less than thirty minutes to issue a bid for two hundred loads of finished goods going to a newly constructed distribution center. Also, if a shipper moves a significant portion of its yearly volume during the same three-month period, it’s super easy to design a bid for that seasonality, too. 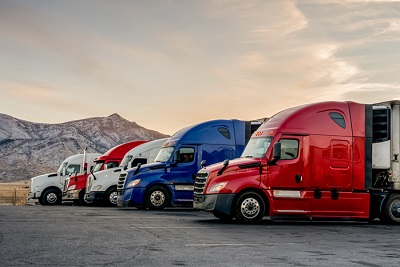 Let’s not forget that when shippers conduct an RFP, the agreed-upon rates are included in budgets that measure not only trucking cost, but the profit margins of the products that are being shipped. And if there’s one thing that finance folks really dislike, it’s to be given a budget for FTL trucking that turns out to be totally bogus.

Based on the widely accepted principle that rate forecasts for shorter budget periods are more accurate than longer ones, it stands to reason that with a three-month bid, the figures provided to accounting will be far more accurate.

If viewed solely through the lens of the past, it’s correct to say that RFPs are obsolete and are no longer needed. In fact, the restrictive nature of FTL RFPs has been widely acknowledged by shippers and carriers for quite some time. However, when technological breakthroughs like the Emerge Freight Procurement Platform are taken into consideration, it’s clear to see why shippers should conduct more FTL RFPs, not less.

The ability of the Freight Procurement Platform to compress the time it takes to prepare and execute a bid, while giving shippers all of the tools they need to access, vet and select from an unlimited pool of pre-vetted carriers isn’t just a game-changer — it’s an entirely new ball game. Add to that the elimination of paper rates, Route Guide corrosion and sub-par service, and the debate on the future of Full Truck Load RFPs is over.

RFPs are here to stay.