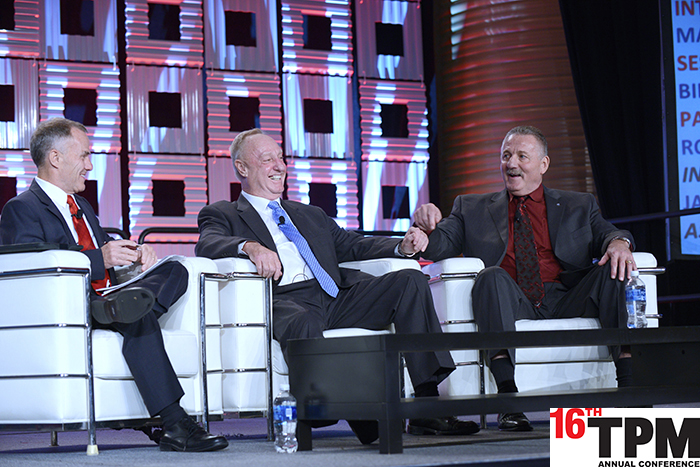 The letter to Robert McEllrath, ILWU president, and James McKenna, PMA president, was in response to a March 1 panel discussion at the 16th JOC TPM Conference in Long Beach, California, in which McKenna said he would formally request early discussions on a contract extension, and McEllrath promised to take that request to his membership.

The contentious contract negotiations that lasted from May 2014 to ratification of the new contract in May 2015 were marked by ILWU work slowdowns that began on  Oct. 31, 2014, and a response by the PMA two months later that included slashing lucrative night and weekend overtime opportunities for longshoremen. A tentative agreement was reached on Feb. 20, 2015, and the disruptions by both parties stopped. However, the worst West Coast congestion since the 2002 ILWU contract negotiations continued for several months.

The new five-year contract will expire on June 30, 2019. McEllrath and McKenna told the TPM conference they do not want a repeat of the 2014-15 disruptions, which severely tarnished the reputation of West Coast ports and resulted in cargo diversions to Canadian Pacific Coast ports as well as to East and Gulf Coast ports. Once BCOs change their cargo routing and establish new working relationships with truckers, warehouses and other service providers, it is difficult to regain their trust, so invariably a portion of the cargo that was diverted is lost forever.

An environment of productivity and reliability is especially important today because the large cargo surges from mega-ships with capacities of as much as 18,000 twenty-foot-equivalent units leave no margin for even the slightest interruptions in cargo-handling that in the past marked the four to five-year periods between contract negotiations.

Therefore the coalition representing manufacturers, farmers, agribusinesses, wholesalers, retailers, importers, exporters, distributors, transportation and logistics providers urged the ILWU and PMA to “begin early discussions on either a contract extension or a new contract with the goal to conclude negotiations before the current contract expires on June 30, 2019.”

Last year, the International Longshoremen’s Association, which represents dockworkers from Maine  to Texas, and the U.S. Maritime Alliance, which represents employers, announced that they would explore the possibility of early talks to extend their contract, which expires in 2018, to 2025, in effect ensuring 10 years to labor peace so BCOs can plan their cargo routing well into the future.

However, prospects for a contract extension on the East Coast took a hit in January when the ILA in New York-New Jersey called a one-day wildcat strike. The reasons for the strike were never clearly defined, although possible dislike for the New York Waterfront Commission and ILA concern about maintaining jurisdiction over chassis maintenance and repair were cited as possible causes. West Coast terminal operators and the ILWU also have mandatory chassis roadability inspections, and jurisdiction in that area is also an ILWU concern.

The BCO letter to McEllrath and McKenna urges the two waterfront leaders to initiate a model for future negotiations that “stresses early and continuous dialogue” to prevent issues from festering over the five or six years between formal contract negotiations and then exploding into work stoppages during the contract talks.

The BCOs also raised one of the most controversial issues involved in West Coast contract negotiations, which is the perpetual bargaining strategy of the ILWU to refuse to extend the previous contract beyond its expiration date in order to gain leverage in the talks. The ILWU took this approach in July 2014. When the contract expired, the no-strike clause became void, opening the door to labor disruptions.

ILWU negotiators continued to bring new demands to the table in the summer and fall of 2014, and on Halloween in the Pacific Northwest the ILWU slashed crane productivity from about 28 container lifts per crane per hour to below 20. The orchestrated job actions moved to Los Angeles-Long Beach the following week, and then to Oakland. Employer retaliation began in December, and the ports were soon gridlocked. By agreeing to maintain an existing contract when talks go beyond the expiration date, calling such job actions would be difficult.

The new contract that was agreed to last May has addressed another vexing problem, which was the age-old arbitration system that adjudicates work rule and manning issues during the life of the contract. The ILWU and PMA believe they finally resolved that problem by replacing the subjective authority of local arbitrators with three-person arbitration panels in Seattle-Tacoma, Portland, Northern California  and Southern California.

The new panels include one member nominated by the ILWU, one by the PMA and a third, neutral arbitrator from a professional arbitration society. It is assumed that if the PMA and ILWU-nominated arbitrators disagree, the neutral, professional arbitrator will bring an objective view to the issue at hand. This new arbitration mechanism is expected to discourage the dozens of oftentimes frivolous work stoppages that occur during the life of a contract.

Therefore, even if the ILWU and PMA fail to ensure that the no-strike clause remains in effect when contract negotiations go beyond the deadline, the BCOs said that “at a minimum, we urge you to maintain the arbitration mechanisms in the existing contract for the duration of negotiations, even if the contract expires before a final agreement is reached.”

Previous contracts, including those in 2002, 2008 and 2014-15, have addressed many of the major issues facing West Coast ports in this tumultuous era of mega-ships, shifting carrier alliances, marine terminal automation, computer technology and chassis jurisdiction. Those are watershed issues that involve the loss of some jobs to technology, but also the creation of new jobs. The stage appears to be set for a new era in which the ports that prosper will be governed by productivity and labor reliability.

“Agreeing early to a long-term contract will provide the stability and predictability our collective members need, while protecting against any self-inflicted harm to the broader U.S. economy. Maintaining arbitration procedures during negotiations will also give a measure of certainty to the cargo interests who are ultimately the ports’ customers,” the BCOs said.

Still no discussion on

Permalink Submitted by ferrullig@minds... on Mar 16, 2016 11:33AM EDT
Still no discussion on productivity. That 28 moves per hour per cane is nearly 30 years old and the ILWU has it down to a science. When will they ever discuss productivity?
Port News›Longshoreman Labor›International Longshore and Warehouse Union