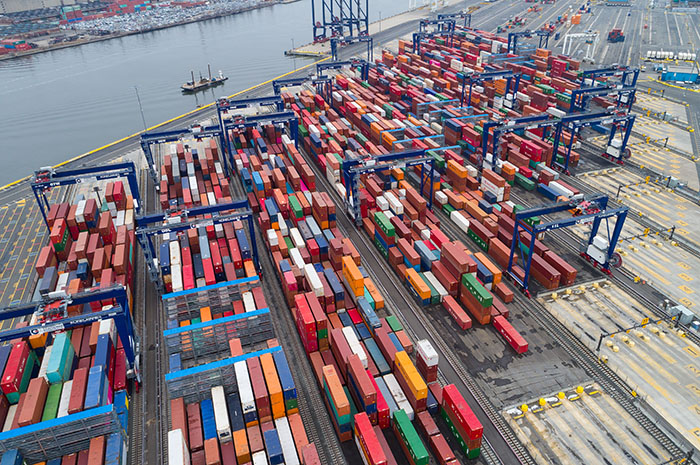 NVOs accounted for 43.7 percent (3.45 million TEU) of the approximately 7.9 million total TEU in US imports from Asia in the first half of 2019. Photo credit: Sky Cinema/Shutterstock.com.

Correction: A previous version of this story cited total US import volume and market share metrics for non-vessel-operating common carriers (NVOs) instead of US import from Asia figures. JOC regrets the error.

The market share of United States imports from Asia booked through non-vessel-operating common carriers (NVOs) slipped for the first time in three years in the first half of 2019, according to data from PIERS, a JOC.com sister company within IHS Markit.

NVO moves accounted for 43.7 percent (3.45 million TEU) of the approximately 7.9 million total TEU of containerized freight imported into the United States from Asia through June, down 1.1 percentage points from 44.8 percent in the same six-month period in 2018, but still up 2.5 points from 41.2 percent in 2015.

Expeditors Internationl of Seattle, Washington, handled the largest combined share of US imports from Asia in the first half, followed by San Francisco-based Apex Group, and Eden Prairie, Minnesota-based C.H. Robinson.

Among the top 25, Hong Kong's Cohesion Freight was the fastest-growing NVO in the trade. Cohesion Freight’s volumes surged 35.9 percent year over year to 31,060 TEU, pushing the forwarder’s market share up 0.2 points to 0.9 percent. Sri Lanka-based SeaMaster Logistics, Inc., meanwhile, saw the largest decline, as a 31.7 percent drop in volume resulted in a 0.6-point decrease in US import market share to 1.4 percent.

Although the deal is not expected to be completed until the fourth quarter, DSV’s $4.6 billion purchase of Swiss-based rival Panalpina will change the rankings considerably next year. Based on current volumes, the combined DSV-Panalpina would have had a 1.5 percent share of the US import market from Asia in the first half, catapulting the company to No. 13 on the list, ahead of UPS Supply Chain Solutions and close behind European competitors DHL and DB Schenker.

This volume seems a little

Permalink Submitted by sean.riley@star... on Sep 27, 2019 9:51AM EDT
This volume seems a little higher for purely Asia to US import volume. I also looked into the volume and found similar rankings when looking at global data. K&N alone seemed to have 3 European ports in their top 10 port of origins contributing to the volume to be ranked 1st. I found Expeditors to be number 1 when looking at just Asia port volume.

I think there're still some

Permalink Submitted by yjh9150@naver.com on Oct 1, 2019 10:52AM EDT
I think there're still some figure errors. Compare datas between 2019 Top 25 NVOs and 2018 Top 25s. There are errors in TEUs and percent volume change. I refer to an article as JOC posted last year with same topic. Also I realized that CH Robinson(2018 was Christal Lines)'s handling volumes in 2018 were bigger than Expediters, but CH's market share(4.9%) was lower than latter(5.1%). Want to know how to distinguish datas. Thanks.

This is awesome - thanks JOC!

Forwarders snagged majority of US imports from Asia through April