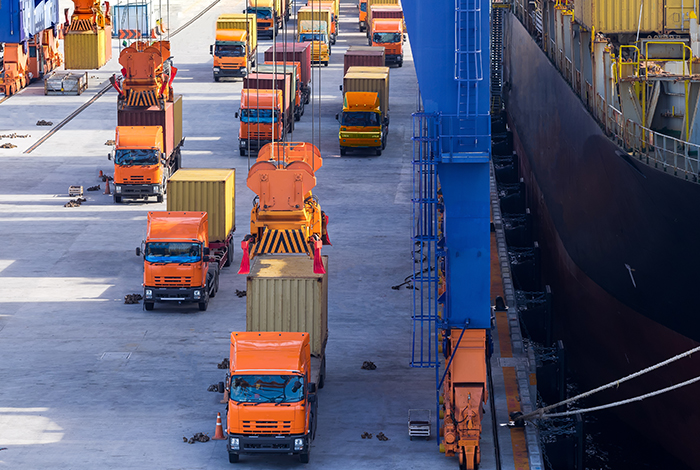 Officials at the port of Manzanillo hope that by moving containers to storage yards outside terminals, there will be more space to service vessels. Photo credit: Shutterstock.com.

Squeezed by rising cargo volumes, the port of Manzanillo is setting up a series of yards for storing imports several miles outside the marine terminals to reduce truck lines that sometimes stretch a mile or more outside Mexico’s largest container gateway.

The port has identified three such yards and is planning for three more that would be located about three miles from the port, with a goal of opening all six of them by early summer, said Fortino Landeros, general manager for Contecon Manzanillo (ICTSI Mexico), one of three container terminals in the port. The proposal is part of an effort to improve fluidity at the port, which ocean carriers and shippers say was operating close to maximum capacity during the July-to-September peak season last year. Even so, container volume through the port last year rose 8.5 percent from 2017.

Manzanillo handled 2.2 million loaded TEU in 2018, up from 2.01 million TEU in 2017, and cargo volume is up another 6.2 percent in the first three months of 2019, according to the Mexican Secretariat of Transportation and Communications. Port officials want to ensure shippers continue to use it to send cargo — including imports from Asia — through the port to Mexico City and other locations in Central Mexico. But the port is facing tough competition from the port of Lazaro Cardenas, about 220 miles south along the Pacific Coast, which saw cargo volumes increase 11.7 percent in 2018 over the year before.

In a separate initiative to improve fluidity in Manzanillo, the Mexican Customs Administration will soon extend operations to 24 hours a day from Monday to Friday, to replace the current schedule under which customs closes at 9 p.m. Ports across North America are struggling to maintain and improve efficiency in the delivery and removal of containers as cargo volumes increase and larger vessels require greater volumes of containers to be shifted in short time spans. Ports such as Montreal and Vancouver have extended terminal gate hours to ease truck traffic during peak times, a strategy long employed at the ports of Los Angeles, Long Beach, and Oakland.

Concern over fluidity in Manzanillo is such that in January Hector Lopez Gutierrez, the general coordinator of ports and merchant marines, who oversees the nation’s ports, and José Ignacio Peralta Sánchez, the governor of the state of Colima, in which Manzanillo is located, agreed to conduct a study on how to improve efficiency in getting cargo in and out of the port.

The truck lines put additional pressure on a local drayage market already stressed by tight national trucking capacity due to a driver shortage and new government rules introduced in 2018 that limit driver service hours and require double tractor-trailers to register with the federal government.

Landeros said he expects the external yards to have an “important impact” on cargo fluidity at Manzanillo. While the yards may have some benefit to Contecon, which is operating at about 70 percent of capacity, they likely will have a much greater impact on the other large terminal in the port, Terminal Especializada en Contenedores 1, which is estimated to be operating at more than 90 percent of capacity, he said.

Trucks enter all of Manzanillo’s terminals through an appointment system, and truck turn times within the terminals average about 80 minutes, according to Landeros. But truckers can wait several hours on the line before they even get into the port, he said.

The external yards would enable the terminals to dray containers there during off-peak hours, freeing up more space in the terminal to help with unloading ships and reducing the traffic coming into the port because many truckers would just go directly to the yard to pick up cargo, Landeros said.

“The benefit to the importer is that the storage is going to be lower cost than inside the port,” Landeros said. “And they can stay much longer than they could inside the port because of the cost.”

Thanks for the article on

Permalink Submitted by agillespie@anse... on May 3, 2019 7:08AM EDT
Thanks for the article on Mexico & Manzanillo Port. Very interesting and helpful. A great value to us managing global logistics is to have a journal like JOC that keeps expanding the coverage. Well done!
Port News›International Ports
North America›Mexico
North America›Mexico›Colima