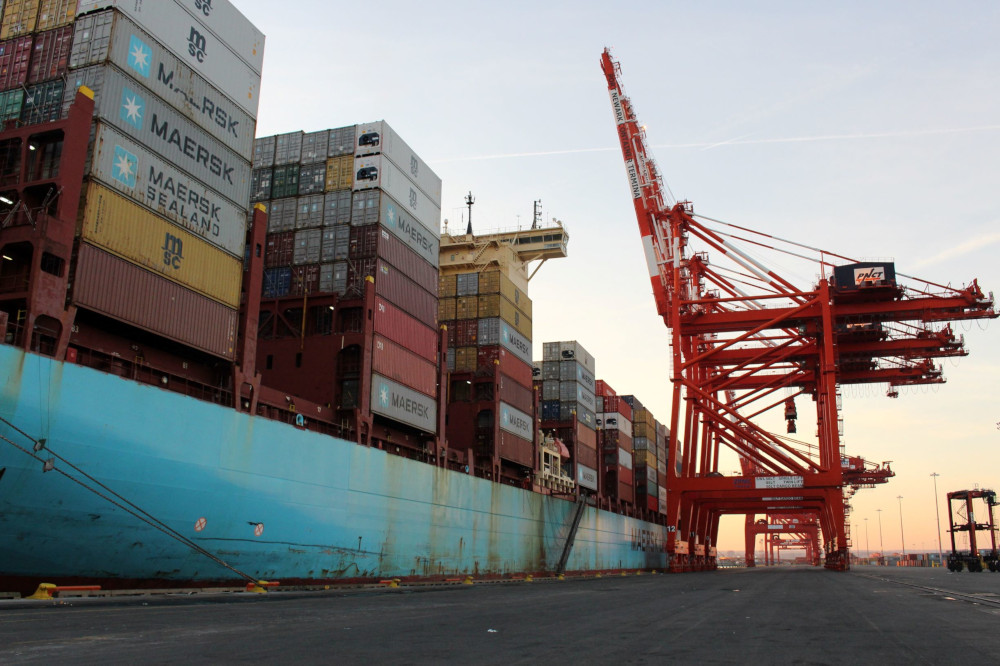 The Port of New York and New Jersey is raising cranes, planning new dredging, and looking to improve the efficiency of ships through its main channel to get ready for ships as big as 18,000 TEU. Photo credit: Hugh R. Morley.

Having seen regular calls from 14,000-TEU ships for roughly 14 months, the Port of New York and New Jersey is preparing for 18,000-TEU vessels.

While the arrival of the 18,000-TEU ships is not imminent, the port is looking to remove potential obstacles well in advance to ensure that traffic can be optimized and navigation improved so that port cargo volumes can continue to grow. The port is raising cranes, planning new dredging, and looking to improve the navigational efficiency through its main channel to prepare for 18,000-TEU vessels.

The work includes a study of whether the port in the future should develop more container handling capacity outside the Bayonne Bridge, to avoid growing vessel congestion on the channel, the Kill Van Kull, that leads to four of the port’s five main terminals. Such a move would be a major change of direction of the port, which has spent more than a decade dredging the channel and raising the bridge to accommodate mega-vessels.

Container growth has been strong and prospects are robust. Loaded cargo handled by the port increased by 6.5 percent to 3.77 million TEU in the first three quarters of 2018, compared with the 2017 period, according to PIERS, a JOC.com sister company. And the Port Authority of New York and New Jersey expects the loaded and unloaded volume to nearly double in the next 20 years.

The short-term preparation includes Maher Terminals, the largest terminal in the New York Harbor, raising nine cranes to accommodate the extra height of containers on the biggest ships, with one completed and eight to go, port officials said. Earlier this year, APM Terminals received and installed four new cranes able to handle the biggest ships. And Port Newark Container Terminal (PNCT) last year received four such cranes, of which two have been installed and another two are under construction.

In the longer term, the US Army Corp of Engineers will undertake a study into how to improve navigation for the size of vessels that currently go through the Kill Van Kull, which leads to Maher Terminals, PNCT, and APM Terminals and GCT New York, said Bethann Rooney, assistant director of the authority’s Ports Division. The issues under scrutiny include how to soften the bends in the channel to make it easier for large ships to turn and how to remove the current limitation that only one big vessel at a time can travel in the channel, Rooney said.

“One way that we could lift that restriction is [to] create a meeting or passing zone in the channel,” she said. “There are certain areas of the channel that we could widen it” through extra dredging, to enable two vessels to pass each other, she said.

The corps also will look at the future limitations on vessels passing through the channel and how to resolve them. Research for the port’s masterplan, which is expected to be released publicly in the second half of 2018, has already revealed that the channel’s use by container vessels may eventually be limited by the heavy traffic from non-container vessels, many of which are oil tankers, Rooney said. One option would be to develop more cargo-handling capacity in the east of New York Harbor, which could be reached without going down the Kill Van Kull, she said.

The port in the past focused on smoothing the passage of big ships through the Kill Van Kull by dredging the channel to 50 feet and raising the Bayonne Bridge, from 151 feet to 215 feet, so that vessels of greater than 9,500 TEU could pass under and reach four of the port’s five main terminals. Until the opening of the elevated bridge, in June 2017, vessels larger than 9,500 TEU could only reach GCT Bayonne and any long-term limitations on ships passing through the Kill Van Kull would likely send more cargo to that terminal.

The port is hoping the transition to bigger ships will boost cargo volumes, especially more discretionary cargo going to or from the Midwest by rail. The port has seen its share of the East Coast loaded container market decline from 33.5 percent of imports and exports in 2010 to 29.2 percent in 2017, when the port handled 4.77 million TEU, PIERS figures show.

However, the port’s East Coast share ticked up to 29.6 percent in the first three quarters of 2018, and its 6.5 percent cargo volume growth over the period outpaced the 5.2 percent increase in the coast as a whole and the 4.2 percent growth in the US as a whole.

That has come amid a steady increase of mega-vessel arrivals. In New York-New Jersey, 56 vessels of more than 10,000 TEU called at the port from May to July 2018, nearly 19 ships a month, figures from the Port Authority show. That compares with just 20 mega-ship calls from July to September 2017, or nearly seven a month, the period immediately following the opening of the raised Bayonne Bridge in early June 2017. The port authority said it is too early to say when first 18,000 TEU ship may arrive.

Before the opening of the bridge, computer-driven simulation exercises carried out at the Maritime Institute of Technology and Graduate Studies in Linthicum Heights, Maryland, showed that the channel could take ships of up to 18,000 TEU. But the US Coast Guard and other harbor stakeholders recommended a series of limitations to improve safety, and the pilots now say they need to do further simulation exercises to prepare for the arrival of the big ships and the nuances of guiding them into the harbor.

The limitations included a rule that only one mega-vessel can traverse the channel at any time, and that ships had to arrive and depart an hour before or after slack water — high or low tide. Ships also can move through the channel at no more than five knots, compared with seven knots in the past, because they displace so much water, which can have a larger impact on the side of the channel.

This article makes no mention

Permalink Submitted by platrace@estee.com on Jan 2, 2019 7:27AM EST
This article makes no mention of any proposed action to address the already over-burdened access to the ports. Truckers now continually can wait long hours to retrieve/drop-off containers. Is any study being done to address this issue?