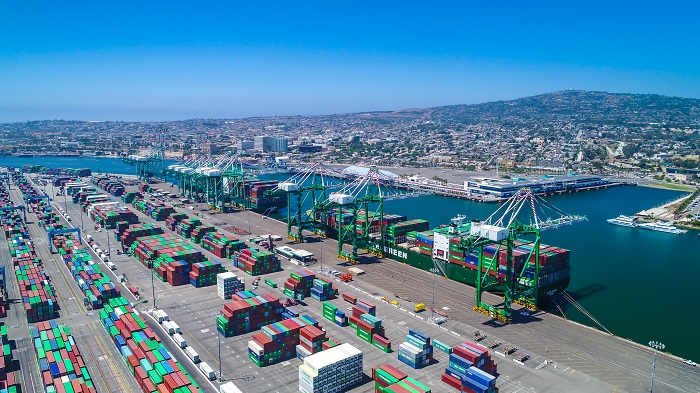 The cancelling of roughly a dozen trans-Pacific sailings in recent weeks wasn’t enough to prevent the spot rate to move a FEU from Asia to the West Coast from falling below $1,000 and below $2,000 to the East Coast.

But the blank sailings — part of carriers’ annual response to plunging Asian exports when many factories in Asia close for the Lunar New Year festivities, which began Feb. 16 — did spur the cancellation of some terminal work shifts at the Los Angeles-Long Beach port complex, resulting in inconveniences for some shippers. The spot rate decline comes amid growing concerns that the US-China trade dispute could further weaken trans-Pacific volumes.

Further, the possibility that the US would impose tariffs on as much as $60 billion in imports and other restrictions, which last week sent stock markets into a nosedive, is well known to shippers, carriers and intermediaries who are closely following trans-Pacific market dynamics in the leadup to the May 1 contract renewal date for many annual eastbound contracts.

Spot rates predictably declined after the factory closures in Asia. The rate to the East Coast this week declined 3.8 percent from last week to $1,933 per FEU, and the West Coast rate declined 7 percent to $945 per FEU, according to the Shanghai Containerized Freight Index published on the JOC Shipping and Logistics Pricing Hub. Breaking the $2,000 and $1,000 barriers could have a psychological impact on annual service contract negotiations, which are under way in the eastbound Pacific.

However, Kenneth O’Brien, chief operating officer of Gemini Shippers Association, said he has encountered no space problems, and Kevin Krause, vice president of ocean services at Seko Transportation, said the non-vessel operator has been “relatively isolated from any capacity issues.” The so-called blank sailings did not uniformly impact beneficial cargo owners (BCOs) and non-vessel operating common carriers in their ability to book space on vessels leaving Asia. David Bennett, president of the Americas at Globe Express Services, said he is finding it to be more difficult to secure space on preferred voyages. Then, with no previous notice, a carrier announced on Thursday it was canceling another sailing next week. “Yes, it’s a problem,” he said.

The blank sailings in Asia are causing logistical issues for BCOs in Southern California. Terminal operators canceled at least a half-dozen day shifts in Los Angeles-Long Beach, with possibly more to come next week until vessel rotations return to normal. One executive explained that a terminal operator can save $100,000 to $150,000 by canceling a shift.

Day shifts are being canceled in Southern California, but not night shifts. In order to receive reimbursements from the PierPass traffic mitigation fee, the terminals must operate night shifts. Since most terminals in Oakland and the Northwest Seaport Alliance have only one shift per day, terminals in Northern California and the Pacific Northwest are maintaining their regular weekday shifts without cancellations.

The shift cancellations in Los Angeles-Long Beach caught BCOs by surprise and are upsetting the logistics plans of small and mid-size importers who do not run second shifts at their warehouses, said Weston LaBar, CEO of the Harbor Trucking Association. Those BCOs often have a limited amount of door space at their warehouses, and the combination of canceled day shifts and restrictions by some terminals on receiving empty containers is using up available door space for unloading trucks, he said.

LaBar had two suggestions. First, shipping lines that have canceled sailings should suspend demurrage and detention charges until vessel schedules are back to normal. BCOs and truckers should not be put into the position of having to request suspensions on a shipment-by-shipment basis. Also, when carriers plan to cancel sailings, they should give customers sufficient advance notice to plan alternative routings and to ask their terminal operators if any work shifts will be canceled, he said.

The dip in spot rates below $2,000 to the East Coast and $1,000 to the West Coast comes as large BCOs begin their service contract negotiations with ocean carriers. Service contracts in the eastbound Pacific normally run for 12 months beginning on May 1. By entering contract negotiations when spot rates are especially anemic, carriers feel they lose some leverage, even though container volumes will increase in the summer as retailers build their inventories for the back-to-school and holiday shopping seasons. On the other hand, demand was particularly strong in the run-up to Chinese New Year, with West Coast imports increasing 14.5 percent in January and February and East Coast imports up 6.6 percent, according to PIERS, a JOC.com sister product.

Carriers are expected to increase capacity through July as deliveries of mega-ships up to 22,000 TEU capacity into the Asia-Europe trade bump vessels of 10,000 to 14,000 TEU capacity to the Pacific. Vessel capacity to the West Coast of North America in the first nine weeks of 2018 rose 6.8 percent, compared with only 0.3 percent in the same period last year, according to SeaIntel Maritime Analysis. Capacity growth to the East Coast exploded by 23.9 percent year over year compared with 0.6 percent in the first nine weeks of 2017. Alphaliner forecasts a capacity increase of 8 to 9 percent this year, with demand expected to increase 5 to 6 percent.

Xeneta CEO and co-founder Patrik Berglund, in a blog written for Xeneta, predicted a repeat of the conditions that developed last spring. Spot rates peaked before the 2017 Lunar New Year, and then began a steady decline in March. By the end of March, spot rates were 32.2 percent lower than they were on Jan. 1, 2017. “During the remainder of 2017, rates subsequently failed to reach the high reported at the start of the year, despite carriers’ best efforts to push through multiple additional increases,” he said.

Permalink Submitted by ferrullig@minds... on Mar 24, 2018 11:28AM EDT
Let's see, blank sailings don't stop them from lowering rates; another article the last two days touting the surge in exports from China - doesn't stop them from lowering rates. Like the letter carries, neither rain, nor sleet or snow will keep them from doing what they do well, lower rates.
Maritime News›Trade Lanes›Trans-Pacific
International Logistics›Logistics Providers
Asia
Asia›China
North America
North America›United States