US ‘high and heavy’ imports rose in 2019 despite trade war

US ‘high and heavy’ imports rose in 2019 despite trade war 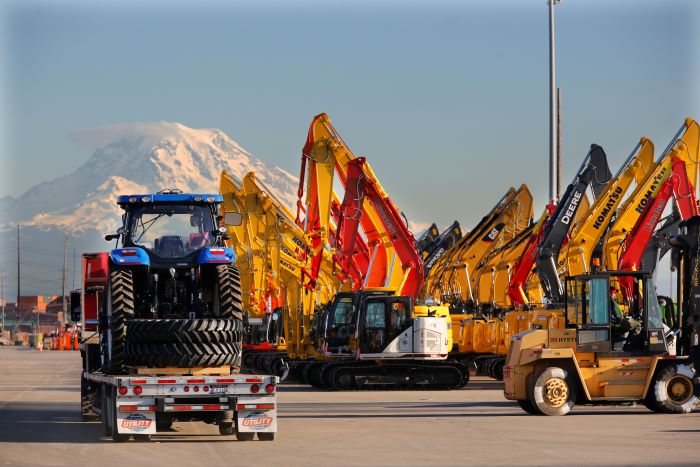 Trade tariffs complicated economics in the high and heavy sector in 2019, but the top 10 US gateways saw year-on-year import volume increases through October. The final tally of 717,717 metric tons of non-vehicle rolling stock and wheeled cargo transported on roll-on/roll-off (ro-ro) ships was up 14.3 percent over 2018, according to PIERS, sister company of JOC.com within IHS Markit.

High and heavy ro-ro includes machinery such as tractors, mining equipment, bulldozers, and other rolling stock, as well as breakbulk or other over-dimensional cargo lashed to trailers and transported via ro-ro, vehicle, or combined ro-ro/vehicle ships.

Although some ports reported seeing minimal impact from the United States-China trade war, others said they had been considerably affected.

“In all of our markets there’s been a lot of uncertainty, peaks, and troughs that we wouldn’t normally see,” Beth Rooney, deputy port director of the Port Authority of New York and New Jersey, told JOC.com.

Andre Elmaleh, senior business development manager of The Northwest Seaport Alliance, said in an email the overall economy is “definitely a concern.”

“Recent reports show that US manufacturing and industrial activity is continuing to slow,” he said. “This could have a negative impact on investment and demand for heavy equipment.”

The Northwest Seaport Alliance saw declines in container, bulk, and forest volumes last year, and blamed the US-China trade war for the slump. The ro-ro market was a different story.

“Exports of harvesters and other agricultural equipment to China on a value basis are nearly double that of 2018 through October after significant growth the previous year,” said Elmaleh. “The US is one of a few suppliers of high-end, specialized farming equipment, and China is continuing to grow its farm capacity to manage dependency on the rest of the world for certain agricultural products.”

Farmers holding off on investments

But perspectives from the farming industry are mixed. One manufacturer of agricultural equipment told JOC.com that although overall farm health looks good, tariffs are hitting the business from both sides. On the supply side, steel tariffs have increased the cost of production. On the demand side, farmers are facing tariffs on grain commodities, which is inhibiting their willingness to invest in new equipment. While farmers may have the money to invest, they’re holding off for now, waiting instead to see what the future brings, the manufacturer said.

Tariffs are also causing shifts in global manufacturing supply chains. “We’ve seen the movement of supplies of materials shift to Southeast Asia – Vietnam, particularly,” NYK Line’s Patrick Cooper said. “I think if you went into any store these days that sells materials that came from China, you’ll see the reality that the purchasing departments have shifted purchasing over to Vietnam and other places in Southeast Asia.”

This means that plants in Southeast Asia are expanding, affecting the high and heavy market via increased shipments of construction equipment, trucks, and trailers. “It’s not a tsunami, but it’s real,” Cooper said. “We’ve seen an increase in high [and] heavy going into that area.”

“The high and heavy volumes follow the money, and the good news is there’s low inflation in many countries,” he added. Low inflation is allowing central banks to ease monetary policy, and the resulting low interest rates mean that infrastructure projects can move forward. Indonesia, India, and the Philippines are key countries to watch in this area, said Cooper.

Farther out in the Pacific, Australia has been a region of note among industry executives. Georgia Ports’ Lynch said that a significant portion of their high and heavy export business has been in mining equipment, particularly to Australia.

Australia's resources include “a lot of raw materials, and they’re close to China,” Cooper said. “That business should go up as a result of agreements they’re making with China for the development of those raw materials.” That, plus the oil and gas and infrastructure sectors, makes Australia a market to watch in 2020.

The Middle East’s instability keeps it a wild card, but there were surges of activity over the summer of 2019, when the area was more stable. Startup trucking companies in Kuwait and Iraq were responsible for “a lot of equipment moved over: trucks, flat-beds, vans,” said Cooper.

Oil and gas cargoes moving into the Middle East also increased last year. “That was driven, I think, by the fact that US fracking equipment is technologically superior to other parts of the world,” Cooper said.

At the time, Saudi Arabia was preparing for its IPO for Saudi Aramco, and it was developing new areas using fracking to build more proven reserves. “Proven reserves are always a good thing when you’re going out into the equity market,” he said. “So, I think that was a big driver in Saudi last year.”

Looking at South America in 2020, China once again comes into focus. On the West coast, raw materials sales to China drive business. “We’ve seen some recent developments of the trade war which appear to be positive, at least for the mentality of the markets,” said Cooper. “So that ultimately will positively affect the high and heavy cargoes into the west coast of South America.”

On the east coast of South America, shippers are paying attention to Brazil’s potential for increased activity in offshore oil and gas. In Argentina, Venezuela, and Colombia, national politics will shape the coming year. For now, the message is “wait and see," said Cooper.

Another factor that will continue to shape the ro-ro market this year is higher fuel costs; carriers are adjusting their rate calculations to reflect IMO 2020.

“Every carrier is coming up with their own calculations depending on where their ships are going and where they fuel their ships,” said Cooper. The challenge, he added, is to adjust their customers’ pricing for each trade area. “It’s probably going to take through the middle of the year to really see where we wind up,” said Cooper.