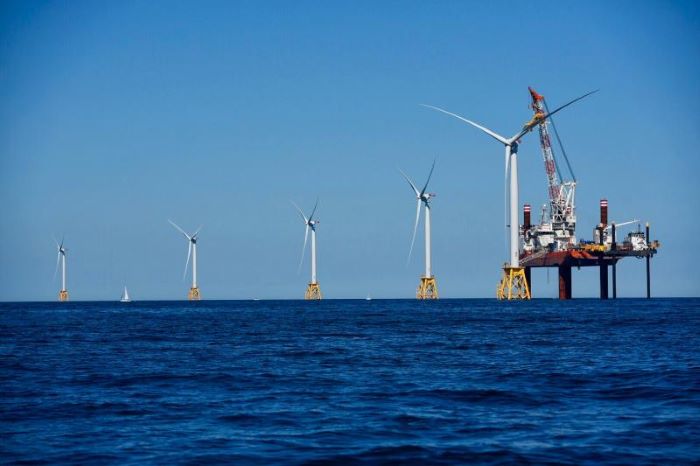 The Virginia Port Authority Tuesday took a step toward joining the United States' newest emerging market — offshore wind — when Danish developer Ørsted and the port signed an agreement to lease a portion of the Portsmouth Marine Terminal to stage wind materials and equipment.

Ørsted is expected to use the Portsmouth terminal to stage materials and equipment for the two-turbine, 6-megawatt Coastal Virginia Offshore Wind project it will build for Dominion Energy, as well as to feed other projects. The lease, which is for an initial 1.7 acres with options to expand to 40 acres, could run through 2026, by which time Ørsted plans to have installed nearly 3,000 MW in the US, according to a statement from the port authority.

The agreement, if fully executed, would lead to site upgrades for cranes and berth improvements for handling heavy cargo, preparing the terminal for wind turbine pre-assembly, staging, and loading, according to the port.

“It is our hope that today’s announcement demonstrates the potential we see in Virginia as a central player in the burgeoning U.S. offshore wind industry,” Thomas Brostrøm, CEO of Ørsted North America, Offshore, said in the statement. “Much activity will be taking place in Virginia and beyond in the coming months and years, and Portsmouth Marine Terminal is well situated to meet our needs both now and in the future.”

While currently only one offshore wind project is generating power in US waters — the 30-MW Block Island wind farm off the coast of Rhode Island — seven gigawatts are expected to be built by 2030, and more than 20 GW by 2050, according to Max Cohen, associate director of North American Power and Renewables for IHS Markit, parent company of JOC.com.

The first bloom of US offshore wind development is occurring in the Northeast, where states need new energy sources, have pledged to follow green initiatives, and have little to no room for onshore wind. The states involved will want to keep supply chains regional to boost job creation, Cohen said, that being a key premise underlying growing political support for offshore wind.

Massive wind blade, turbine, and nacelle cargoes, long a mainstay of US Gulf ports, will increase steadily throughout the northeastern US if the growth expected for offshore wind energy development comes to fruition. US offshore wind is “the definition of an emerging market,” Brent Patterson, senior vice president of global markets for Blue Water Shipping, told JOC.com last spring. However, potential bottlenecks worrying project developers revolve around a lack of skilled workers, cargo and support vessels, and appropriate infrastructure.

Block Island is a project of Deepwater Wind, which was acquired by Ørsted in late 2018 for $510 million. That acquisition netted Ørsted a portfolio of planned wind farm projects off the coasts of Rhode Island, Connecticut, Maryland, and New York with a combined 810 MW of estimated capacity and long-term revenue contracts in place. According to Ørsted statements at the time, it also includes three US Bureau of Ocean Energy Management offshore leases with 2.5 GW of wind energy potential in Massachusetts and Delaware. Ørsted operates nearly 25 offshore wind farms and has 15 projects in the pipeline in six countries, according to the company.