Höegh Autoliners is a leading global provider of transportation and logistics services within the Roll-on/Roll-off segment. Its fleet of Pure Car and Truck Carriers (PCTCs) provide regular liner services to an extensive selection of ports. Its customers range from global vehicle manufacturers to producers of high and heavy construction equipment and other rolling and non-rolling stock. The cargo types it transport range from mining equipment, power equipment, railcars, trolleys, construction equipment, agricultural equipment, boats and yachts, automobiles, trucks, buses and trailers. Its services cover the following trade lanes:

-- East Asia to Africa: Scheduled services from Japan, Korea, China and Singapore to destinations in South and East Africa, as well as a synchronised connection in Durban that connects to the Indian Ocean Islands and West Africa. In New Zealand, Auckland is serviced twice a month, while Lyttelton, Wellington and Nelson are services through reliable feedering. A direct call to Noumea, New Caledonia is also offered.

-- East Asia to Europe: From Japan, Korea and China with discharges in the Red Sea, Mediterranean, United Kingdom and Continental Europe.

-- East Asia to North America and Caribbean: Dedicated liner service from East Asia to the US Gulf and East Coast, and the Caribbean. Caribbean ports are served via Kingston, Jamaica, while cargo is shipped to final destinations by Höegh Autoliners Shortsea Americas service.

-- Europe to USA, Mexico and Oceania: Service connecting Höegh Autoliners’ main ports in Europe with Baltimore, Jacksonville, Freeport (USA); Kingston (Jamaica) and Lazaro Cardenas (Mexico); and directly to destinations in both New Zealand and Australia via the Pacific Ocean.

-- Europe to the Caribbean and the Americas: Service to major Caribbean markets as well as to Mexico, and scheduled sailings from Europe. A variety of smaller Caribbean and Latin American destinations via transhipment via dedicated Caribbean short sea service.

-- Middle East, India, Africa to the Americas: Connecting the Middle East and India with Africa; Mexico and the US. In Africa, via transhipment in the ports of Maputo, Durban and Dakar; onto East and West Africa, Indian Ocean islands, and Oceania. .

--- North America to Europe: Connecting the US Gulf and East coasts with the main ports of Europe. Through transhipment in Bremerhaven onto ports in Europe, South Africa, Indian Ocean islands, and New Caledonia. East African ports via transhipment in Tangier or Durban. All major ports in Australia and New Zealand are serviced via direct sailings from US and Mexico.

Solving for Uncertainty: A Guide to Variable Transportation Budgets
END_OF_DOCUMENT_TOKEN_TO_BE_REPLACED 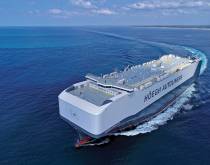 30 Jun 2021
Despite higher costs to move automobiles and high and heavy cargoes, and uncertainties related to the COVID‑19 pandemic that continue to challenge the recovery, demand is rebounding quickly.
MORE »

Hoegh Autoliners to add US East Coast-Oceania service
11 Jan 2018
The vessel rotation will include Auckland, New Zealand, and the Australian ports of Brisbane, Port Kembla, Melbourne, and Fremantle.