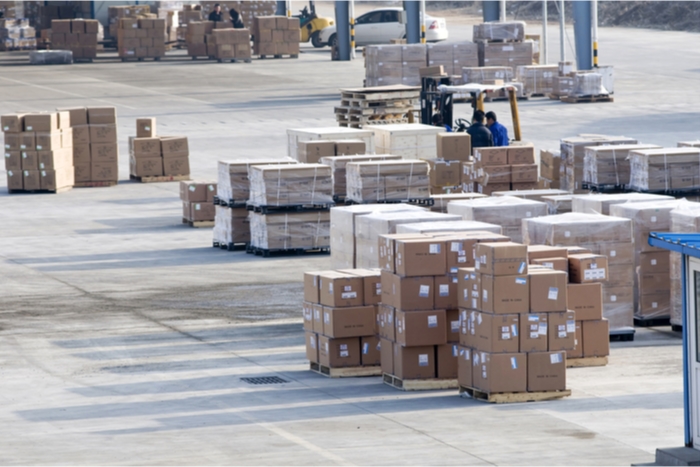 Personal protective equipment made in China is often delivered to airports in hundreds of thousands of loose cartons rather than being packed on pallets, making loading less efficient and creating delays. Photo credit: Shutterstock.com.

China’s cargo airport hubs are choked with a backlog of medical supplies as the enormous volume of exports to countries battling the coronavirus disease 2019 (COVID-19) overwhelms customs and ground handling operations. New customs rules governing the clearance and inspection of personal protective equipment (PPE) is exacerbating the problem.

The bottlenecks are particularly acute at Shanghai Pudong, but logistics providers report lengthy delays at Guangzhou Baiyun Airport in south China, and at Zhengzhou Xinzheng Airport in Henan. Delays are so severe that despite demand for air freight out of China exceeding all available capacity, some charter flights have no option but to leave before being fully loaded.

With the ground delays not expected to ease until demand for PPE starts to decline, forwarders are now insisting cargo is received at freight stations up to four days before flight departures, twice as long as the normal requirements.

“We now ask customers for a minimum cut-off time of 72 hours before flight departure for delivery of cargo, and in case of special charters we may ask even more,” Edoardo Podestà, COO of air and sea logistics at Dachser Group, told JOC.com. “But right now, 72 hours will not be enough to have a minimum buffer and be sure of not having a plane depart leaving cargo behind. There are more and more charters departing with less than the expected load because cargo did not make it in time and the flight could not wait.”

SEKO Logistics told customers in a coronavirus update Monday that because of the Shanghai Pudong backlogs, cargo for export must reach the service provider’s container freight station four days before flight departure. “This four days of ready-for-carriage processing time is essential to avoid shipments missing cut-off times,” it said.

Marco Reichel, regional business development manager Asia Pacific for Crane Worldwide Logistics, said the congestion extended to all Shanghai terminals where drivers were having to wait up to 72 hours. “We see the same at other mainland airports with huge congestion because of customs inspections,” he said.

Podestà agreed, and said congestion was developing at Guangzhou Baiyun Airport in South China, and at Henan’s Zhengzhou Xinzheng Airport.

One of the main contributing factors behind the bottlenecks is related to new rules by China Customs for the clearance and inspection of PPE that lengthens the process and makes it difficult to observe a rule that allows a 72-hour window from when the cargo is cleared by customs to when it is loaded on a plane.

“If, due to delays or other factors, this window is missed even by one carton, the customs clearance for the whole shipment is no longer valid and the process must start again,” Podestà told JOC.com. “Right now there are a lot of very large shipments because of the charters where cargo is sent to the terminal on several trucks at different times depending on production and quality inspection, so large truck queues have developed and this increases the risk of having part of the cargo missing the 72-hours window.”

Social distancing rules and a shortage of terminal staff are also slowing ground handling operations at Shanghai for both commercial and charter flights. The unloading of trucks takes longer, and creates lengthy queues.

But a significant delay-causing factor has been created by the sheer volume combined with the way the cargo is packaged. Podestà said PPE items — gloves, aprons, surgical masks, eye protection, and protective gowns — were delivered in the thousands in loose cartons rather than being packed on pallets.

“Imagine what it means to offload a truck of loose cartons instead of on skids or as palletized cargo, and in some cases loading loose cartons one by one on passenger seats, then wrapping them up and fastening them,” he said. “The passenger flights used as freighters, or even Antonovs, help to move cargo, but are not very efficient when it comes to loading or unloading loose cargo.”

Demand continues to outstrip capacity, and air freight prices are hitting new highs every week in response. On May 4, Shanghai-Europe rates were up 313 percent year over year to $10.45 per kg, while Shanghai-North America rates were up 226 percent to $10.55/kg, according to the TAC Index.