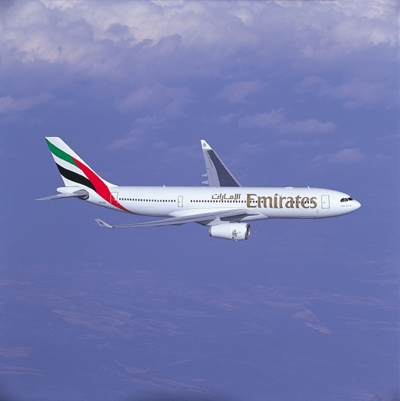 Emirates Airbus A330-200, of the type used on the Dubai-Sialkot route.

Emirates Group boosted revenue by 13 percent in the first six months of its fiscal year, through Sept. 30, to $11.5 billion.

Profits for the group were up 4 percent to $600 million. The volume of cargo uplifted was up by 5.2 percent.

Separately, subsidiary Emirates SkyCargo has started a fifth service to Pakistan, taking its total weekly capacity to and from the Indian subcontinent to 10,900 metric tons.

With the addition of the new four-times-weekly service to Sialkot, a major manufacturing hub, the company now offers 63 flights a week between Dubai and Pakistan. The Dubai-Sialkot route employs an Airbus A330-200, providing a total weekly cargo capacity of up to 68 metric tons in each direction.

The air cargo carrier said key exports from Sialkot include sporting goods and clothing, gloves, surgical instruments, cutlery, ceramics and leather garments, which are shipped worldwide. In the other direction, raw materials for manufacturing these products will be the leading commodities, imported from Europe and the Middle East.

Pakistan was the first country on Emirates’ route network when it launched service to Karachi in 1985. In the period from 2007 to  2012, the company carried 108,000 metric tons of cargo on its belly-hold flights toIslamabad, Karachi, Lahore and Peshawar.