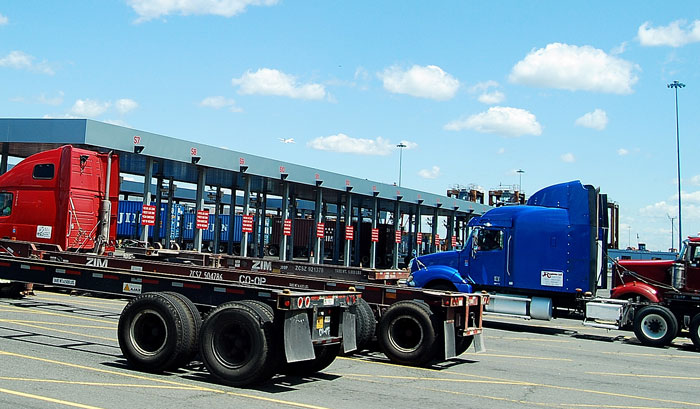 An industry group working to improve operations at the Port of New York and New Jersey appears to be moving closer to an agreement on how to implement a portwide pool of interchangeable “gray” chassis.

“I think we’re getting very close to a decision on how we will go forward,” said John Nardi, president of the New York Shipping Association, who spoke Wednesday in Baltimore at a Federal Maritime Commission hearing on port congestion.

FMC members William Doyle and Richard Lidinsky presided over the hearing, the second of four that the commission is holding. The first was held last month in Long Beach. Additional sessions are scheduled for Charleston and New Orleans.

Nardi is co-chairman of the Council on Port Performance, which was organized last summer to implement 23 recommendations of a port performance task force. The task force identified chassis availability as a top cause of port delays.

Nardi said the chassis committee of the New York-New Jersey Council on Port Performance has met several times in the last six weeks  to discuss ways to move the port toward a fully interchangeable chassis supply.

Truckers complain that shortages of usable chassis force them to waste time searching for equipment and making unnecessary trips to switch chassis between pickups or deliveries for different customers. Chassis providers say the current system creates imbalances between terminals that require expensive repositioning.

No recommendation has been reached on how to achieve a gray chassis model for New York-New Jersey port. Discussion has focused on two possible models — a cooperative “market pool” managed by a single entity, and a “pool of pools” in which different competing pools would interchange equipment through a usage agreement.

In the ports of Los Angeles and Long Beach, chassis providers Direct ChassisLink and Flexi-Van Leasing hope by early next year to begin sharing chassis under a portwide usage agreement. Bill Shea, chief executive of DCLI, said the concept also could be applied to other U.S. ports.

Keith Lovetro, president of TRAC Intermodal, which has about two-thirds of the chassis in the New York-New Jersey market, said TRAC favors a market pool, but that he agreed with others at the FMC hearing that the port needs a fully interchangeable gray pool.

Chassis supply was only one of many issues aired at the Baltimore hearing. Commissioners William Doyle and Richard Lidinsky presided over the session, which also was attended by Helen Bentley, a former FMC chair and Maryland congresswoman.

Shirley Roebuck, owner of Gilco Trucking at the Port of Virginia, said she often arrives at her office on Fridays to learn that another driver has quit because of chronic delays at the port.  “In 2001, I had 48 trucks. Today I’m running 25,” she said.

John Reinhart, CEO at the Port of Virginia, noted a series of recent steps by the port to improve turn times, but said truckers’ problems are real. “I am worried,” he said. “If we don’t improve the effectiveness of these operations, we are going to lose a critical component of our supply chain,” he said.

Gerald Coyle, vice president of Evans Delivery, which has 2,600 owner-operator drivers and serves all U.S. East and Gulf Coast ports, said container terminals should use radio-frequency identification, global positioning systems and other technology to accurately measure queue times, including time drivers spend in lines outside gates.

“Currently, there is no system or methodology in place for the measurement of the amount of time trucks spend in the queue, waiting to enter terminals,” Coyle said. “This is an important component of making the marine terminals more efficient.”

Doyle and Lidinsky listened without comment to the speakers, all of whom seemed to agree that port congestion has no simple solution. Few of the industry officials who spoke as panelists recommended specific actions by the commission. although several truckers and others who spoke later in the day urged the commission to use its regulatory authority to crack down on what they said are abuses in terminals' handling of detention payments and demurrage penalties.

David Manning, president of TCW and Tennessee Express and chairman of the North American Chassis Pool Cooperative, urged the commission to review and monitor the transfer of chassis from ocean carriers to lessors, truckers and others to ensure that the new model is transparent and fair and promotes competition.

Curtis Whalen, executive director of the American Trucking Associations’ Intermodal Motor Carriers Conference, hinted at a possible commission role. In his written statement submitted for the hearing, he noted that terminals file their tariffs with the FMC.

He said that under those tariffs, terminals don’t pay detention penalties for waiting outside gates, even though drivers who enter a long waiting queue “are in it for the duration,” with no way to exit the line.

“We therefore urge the commission to review the efficacy of tariff filings covering excessive wait time compensation and to encourage terminals to make RFID and other real-time traffic and gate congestion information available to motor carriers so they can maximize driver use of on-duty hours, including available data from readers positioned outside the gate,” Whalen’s statement said.