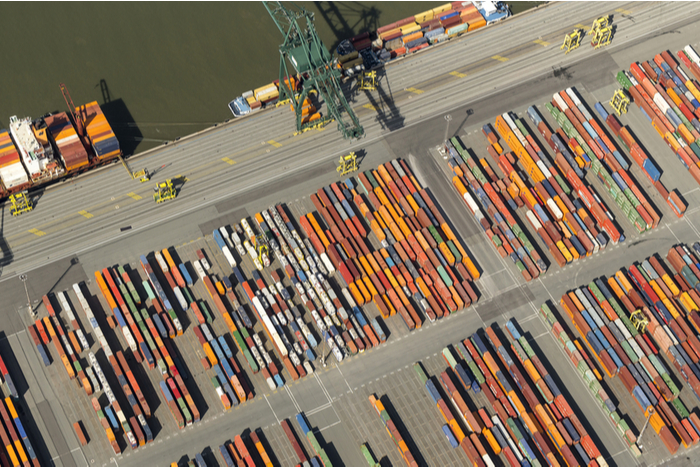 The uncertain container shipping market has made shippers on the Asia-Europe trade change their contracting behavior. Photo credit: Shutterstock.com.

Cargo owners are changing their contracting and shipping patterns on the Asia–Europe trade as they adjust to the severe capacity and demand disruptions caused by the coronavirus disease 2019 (COVID-19).

To match capacity with the falling bookings, carriers have extended the high levels of blanked sailings on Asia-Europe deep into the third quarter, and faced with such extreme capacity cuts, shippers appear to be changing their contracting behavior.

Patrik Berglund, CEO of Xeneta, an ocean and air freight rate benchmarking and market analytics platform  said shippers typically issue tenders on the Asia–Europe trade in the first, second, or fourth quarters, unlike on the trans-Pacific, where the vast majority of annual contracts are negotiated in March and April and begin on May 1. But with the COVID-19 pandemic playing havoc with demand, that has changed this year.

“In some cases, personnel got furloughed, making it difficult to stick to the normal tender cycle,” he told JOC.com. “In some cases, the businesses considered it a poor time to go to market, so they held off. In some cases, companies wanted to get it done early on to secure valid contracts through a difficult period. In some cases, tenders were already started, and some got finished — some got pushed — for many different reasons.”

The logistics director for a Europe-based shipper that asked not to be identified said his firm has “noticed a different attitude from carriers.”

“Some carriers that are normally not aggressive price-wise are now being aggressive, and the other way around,” the source said. “But even the aggressive companies are not cutting rates and all carriers are not budging from their rate levels, even at the cost of losing volume.”

About half the containers on Asia–Europe routes move under contract, and for contracts negotiated so far in 2020, long-term rates are at similar levels, or even slightly higher, than those secured in 2019, according to conversations with three shippers, three forwarders, and four carriers.

Shippers contacted by JOC.com said their Asia-Europe long-term rates negotiated so far were secured at the same level as last year, with carriers simply refusing to discount.

The supply chain head for a Southern Europe-based shipper said 12-month Asia–Europe rate levels from carriers were “competitive.” He said finalized rates for large contracts from China base ports to Northern Europe ranged from $1,100 to $1,350 per FEU, much the same as the prices he secured in 2019.

Added another European shipper, “The carriers are staying strong and are not going out of their way to ‘buy’ business. We do not see any signs of carriers undercutting each other. At least not yet.”

While it is difficult to compare contracts because of the diverse requirements and commodities transported by shippers on the Asia–Europe trade, the spokesperson for an Asia-based carrier said the 12-month Asia–Europe contract rates signed so far this year were similar to the levels of 2019.

“But each carrier may have a different level of the long-term rates in the light of various commercial perspectives, including service coverage, type of cargo, composition of strategic customers, etc.,” the spokesperson noted.

The spokesperson for a Europe-headquartered container carrier who asked not to be identified said annual Asia–Europe rates signed with a range of customers this year were at approximately the same level, or slightly higher, than those in their 2019 long-term contracts.

“When it comes to renegotiations of our contracts for Asia, Europe, and the Pacific, we have signed up the planned volume, with rates fully covering the IMO 2020 fuel cost,” Maersk CEO Søren Skou said during the carrier’s first-quarter earnings call. “We have not seen any negative impact on the tenders from COVID-19.”

Non-vessel operating common carriers (NVOs) are reluctant to speak publicly about commercially sensitive rates — and for fear of incurring the wrath of regulators — but the ocean freight director for a global forwarder confirmed that long-term NVO contract rates were not decreasing significantly this year. “I imagine the picture might change in the second half, when it will all be about timing,” he said.

The logistics director for a large European shipper told JOC.com he was about to conclude an annual contract to move tens of thousands of TEU from China to North Europe over the next 12 months.

“The contract covers around 20 port pairs with fixed prices and no bunker adjustment factor (BAF), and we are seeing that the pricing level is similar to that of the contract we secured last year,” he said.

A Germany-based shipper said his container imports into Europe were 60 percent covered by annual contracts with the carriers, and 40 percent with either carriers or NVOs. “In cases where we simply must have more space, we get what we need via deals, and so far we have not had any space issues,” he said.

Peter Sand, chief shipping analyst at BIMCO, said contracted rate levels on Asia-Europe were slightly above those of last year, although the long-term prices have softened since January.

“The 5.4 percent decline from January to May has continued, and as of June 10, contract rates from Asia to Europe have fallen by 6 percent since the 1 January,” Sand said. “However, compared to June 10, 2019, rates are up by 1 percent this year. If freight rates are to be held up, then carriers must continue to blank sailings to ensure balance in supply and demand.”

Godfried Smit, secretary general of the European Shippers’ Council, said cargo owners were struggling with their long-term planning because of the capacity-demand disruption.

“This is a market with volatile capacity where liners remain price setters and keep freight rates high, despite very low fuel indexes, whilst they can only plan in the short term themselves,” he said.

“Our view is that shippers will benefit from shorter-term contracts, and either by diversifying their carriers' selection pool or by concentrating more on financially healthier or government-supported carriers,” added Smit.

The high level of blank sailings seen in the second quarter have now been extended through August, by the end of which (week 34), carriers will have canceled 67 sailings on Asia–North Europe strings since the end of March, and 51 sailings on Asia–Mediterranean routes, as a direct result of the volume decline caused by the COVID-19 crisis, according to Sea-Intelligence Maritime Analysis.

“We can increasingly see that many of these customers now need their cargo to be speeded up as the economies reopen in Europe,” he said. “Not all of it, but certain faster-moving segments that were delayed are now in demand."

The withdrawn capacity has enabled spot rates to remain well above year over year levels on Asia–Europe lanes after Chinese New Year. Rates fell $5 on the Asia-North Europe trade this week, according to the Shanghai Containerized Freight Index (SCFI), but were still 15 percent above the same week last year. The weekly rate SCFI movements are tracked at the JOC Shipping & Logistics Pricing Hub.

“The key thing from the market is that carriers have done a solid job balancing capacity with demand, and they are holding the fort so far, keeping rates up while costs have come down for them,” said Berglund.