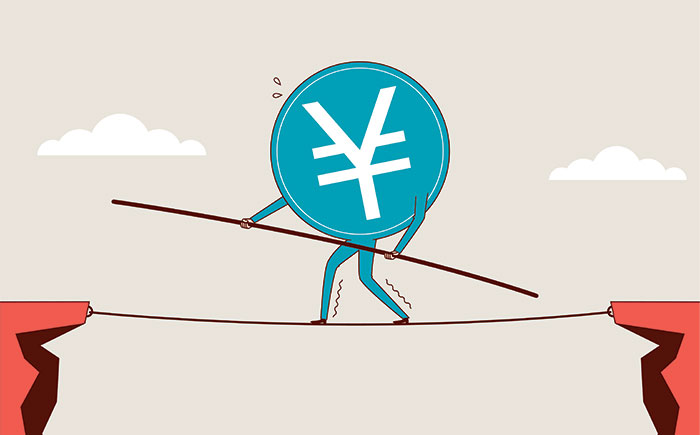 Editor's Note: An earlier version of this article contained incorrect information and data about Rayonier Advanced Materials' exports to China.

When China devalued its currency in mid-August after a 10-year run-up against the dollar, the People’s Bank of China described the move as a natural step toward the creation of a market dominated Chinese exchange rate. No one in the market — not importers, exporters, manufacturers, investors or analysts — bought the message. Global stocks and commodity markets sold off at an astonishing rate, triggered by fears that China could launch a prolonged currency war that would boost its own exports at the expense of those it buys from, including the U.S.

Long after stock and commodity markets regain their footing, other questions and doubts about China’s intentions will linger, many that impact global supply chains in general, and containerized shipping in particular. What does China’s new philosophy mean for the retail sector? If the country pursues an aggressive policy of devaluing the yuan further, could it derail the 12-nation Trans-Pacific Partnership, so cherished by the U.S., even if China isn’t lined up as an initial member?

At its core, the devaluation comes down to trade, several economists and China experts told JOC.com. “Strip away the rhetoric, and the devaluation is in response to miserable July trade figures,” said Marshall Meyer, professor emeritus of management at Wharton and a longtime China expert.

Chinese exports plunged 8.3 percent year-over-year in July, the worst decline in four months, with depressed demand from Europe and the U.S., and far worse than the 1 percent decline most economists expected.

“The intent,” Meyer added, “is to jump-start the export engine. Whether it will, given soft global demand, is an open question.”

Mario Moreno, chief economist for The Journal of Commerce, said Chinese policymakers have been alarmed that the yuan in recent years has appreciated so much against the currencies of the country’s major trading partners, including the U.S., Japan and South Korea. As the yuan has appreciated, its exports have suffered, and their growth rate has failed to meet expectations. “They are trying to boost exports,” he said, “because exports have been underperforming in recent months. They say it is one-time depreciation, and on the surface it is.”

Hufbauer said he’s skeptical that China’s economy has been growing at the reported rate of 7 percent. “That figure does not comport with the industry figures for imports and exports,” he said. “China’s growth was not what they wanted it to be. That was what was triggering the decision.”

The initial 2 percent devaluation is “actually a very small step,” Moreno said, and it will have only a minor impact on U.S. trade, unless the yuan is allowed to become significantly cheaper in coming months.

Trade in most containerized items from China — such as footwear, apparel and furniture — is settled in U.S. dollars, Moreno noted. The owner pays in U.S. dollars and the goods are then shipped to the U.S. or elsewhere. In that sense, the situation isn’t going to change much. He added, however, that Chinese workers get paid in the (newly devalued) yuan, so the owners of such Chinese factories will have more money left after paying the local workers.

“That is going to offset the double-digit growth rates we are seeing in Chinese wages,” Moreno said. “That is a plus for them. In my view, it will have a positive effect. Thanks to the yuan devaluation, all of those factories that produce low-value-added products in China will have another reason to stay there,” rather than relocate to Southeast Asian nations such as Vietnam and Cambodia.

Although the initial 2 percent devaluation wasn’t much, financial markets fear that there could be another, more gradual devaluation in the future, he noted. “It might be a big effect,” Moreno said.

How much further devaluation of the yuan would be required to stimulate significant new demand for Chinese exports? Hong Kong-based Charles de Trenck, an independent analyst, said China would need a devaluation of 10 to 15 percent to help generate exports. Even that would only help in the medium term, because China’s effective exchange rate already has appreciated around 20 percent since 2013,” according IHS Economics & Country Risk, a sister publication of JOC.com within IHS.

Most observers don’t see China embarking on an aggressive policy of continuing to devalue its currency. “There could be one more devaluation, but not much more,” he said. China wants its currency to be viewed as a “safe haven” and a global reserve currency, and a much weaker yuan would undermine that strategy by encouraging capital flight, some economists say, and that would harm the domestic economy.

“Dramatic renminbi weakness is unlikely, as it is not supportive of long-term competitiveness,” said Jason Sun, Asia analyst for Citi. “Over the long term, weak currencies tend to produce weak companies and returns on equity are lower than in strong currency markets.”

Rather than being a step to manipulate its currency, the action taken by China “is actually an effort to let the yuan fluctuate according to the dynamics of the exchange market,” said Nicholas Lardy, senior fellow at the Peterson Institute for International Economics. “It is unlikely that this move will usher in another chapter of currency manipulation to support Chinese exports and thus its economic growth.

“China may well be concerned about an economic slowdown accompanied by a slump in exports,” Lardy said, “but its motivation for this move is almost certainly tied to another objective: China’s aspiration to have the yuan join the four other major international currencies — the dollar, the euro, the pound sterling and the yen — that comprise the so-called special drawing rights basket of the International Monetary Fund. The IMF executive board will decide in November whether to include the RMB in that basket.”

Nevertheless, “Some people with a more conspiratorial feeling than I have also toss in the notion that maybe this is the Chinese way of slowing down the Trans-Pacific Partnership,” Hufbauer said. “I would imagine that a good number of our TPP partners, either through market forces or through deliberate intervention, will now weaken their exchange rates to some extent. That, in turn, will inflame the currency clause group in the (U.S.) Congress.”

Hufbauer said there may be huge demand for a strong currency clause in the upcoming text of the TPP. Such a move would impose enforceable obligations against currency manipulation by China or other TPP parties. Failure to include such a clause in that text could wind up being the final straw for the ambitious trade pact.

“I think the TPP is now in a difficult position because of the timing” about whether to include such a clause in the pact,” he said. “Since they can’t resolve the issue in August, they are punting to September, and maybe they don’t get any handshake agreement until the APEC (Asia-Pacific Economic Cooperation) meeting in November. That punts the ratification process into the middle of the (U.S.) presidential campaign — which is not a great time. Realistically, that probably punts the TPP down to the next president.”

As for the impact of further yuan devaluation on the U.S. trade deficit with China, “the U.S. economy is doing quite nicely compared with everyone else, although not compared with what we (ideally) want,” Hufbauer said. “And when the economy does nicely, the trade deficit widens, which it is doing. But whether that will become a second level of irritant (for the TPP) remains to be seen.”

A group of congressmen and others regard the bilateral trade deficit with China as one of the great weaknesses of the U.S. and see China’s weak currency as a major factor in the erosion of the U.S. manufacturing base, Hufbauer noted. This includes Donald Trump, who views China’s yuan devaluation as a major bone of contention between the two countries.

But he cautions against assuming the initial devaluation provides clear evidence of a Beijing-based plot to undermine the TPP. Some scholars and officials in China may view the TPP “as some sort of hostile U.S. diplomacy” aimed at limiting China’s leverage in determining the trade agenda of the next several years, Hufbauer noted. But he has recently sensed “a real warming toward the revisions in the TPP” text among many Chinese. There’s a belief, he says, that China will join the pact in a second phase and that the reforms the deal engenders will be very good for China.

“Three or four years ago, there was quite a lot of hostility to the TPP,” he noted. “Now there is quite a bit of sympathy to TPP, with the thinking that this will be a platform for what the Chinese see as free-trade area of Asia and the Pacific. I’m not inclined to believe the conspiracy theory, but I know it’s out there.”

Certainly, China is busy building its own trade links with the rest of Asia. Its One Belt, One Road initiative, for example, aims to create a modern Silk Road trade route linking central, west and southern Asia with China. That initiative is very infrastructure-oriented, Hufbauer added. “I don’t think that clashes with the TPP, which is more about the rules with which you organize the trading relationships, although some people would see it as a possible competition,” he said.

For all its implicit risks, devaluation of the yuan has some positives for U.S. consumers of imported Chinese goods. “I am quite happy to see China producing and exporting more, because they have contributed a lot to the economy that way,” Hufbauer said. Other things being equal, a cheaper currency makes Chinese goods available at lower prices in foreign currencies. Unfortunately, with the economic pie growing at such a slow pace, “the political perception is that if your exports grow, mine will shrink.”